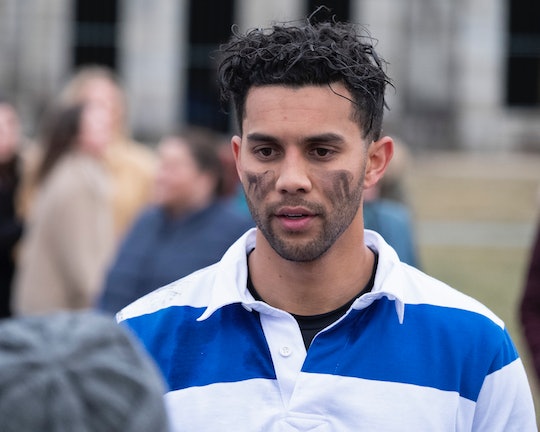 Devin Told Luke What 'Bachelorette' Fans Have Been Thinking All Season

Luke was the Bachelorette villain of Hannah's season and whether he meant for that to happen or not, he gained that title because of his actions. On the "Men Tell All" special, Devin, who was sent home before he could make it as far as Luke did, came from backstage to confront Luke about how he behaved this season. And Devin's speech to Luke on The Bachelorette about there being "two types of men" was something Luke needed to hear.

Devin told Luke, "There at two types of men — those who want a strong, independent woman and those who want a woman they can control. You seem like you want a woman you can control." He was prompted to come on-stage after watching footage of Luke showing up to a rose ceremony after he was sent home and then justifying his actions with Chris Harrison on the "Men Tell All" special. Basically, being as messy as possible.

It's hard to say if what Devin said got through to Luke or made a difference, but after a season of mistakes with Hannah through his actions and words, it was what Luke needed to hear from one of the other Bachelorette men.

Luke's behavior this season caused a lot of fans to see red flags where Hannah couldn't yet see them herself. But toward the end of the season, Luke's behavior became even more problematic and it sent Hannah over the edge more than once. Earlier this season, Luke had a hard time with the fact that Hannah was dating a dozen other guys while she dated him. Unfortunately for Luke, that is how The Bachelorette works, but there is one every season who can't seem to grasp how the *journey* goes.

Luke only made matters worse during his fantasy suite date with Hannah. He told her that if he found out she had sex with any of the other guys on her other overnight dates, he would remove himself from their relationship. Again, I don't think Luke realized how The Bachelorette works. So when Hannah told him she had, in fact, slept with someone else, it was a hard pill for him to swallow.

His behavior escalated from there and Hannah said his words made her feel judged. By going on-stage to tell Luke off, Devin said what a lot of the other men were probably already thinking. And Devin isn't the first of Hannah's men to confront Luke about his behavior. Tyler, Jed, and Peter tried to get Luke to leave the rose ceremony he crashed. And one of the men told Luke that "no means no." Luke might have thought he was doing the right thing by pursuing Hannah relentlessly, but when she made it clear that she didn't want to continue anything with him, that should have been the end.

Devin told Luke about the "two types of men" when he accused Luke of wanting Hannah to be more of a trophy for him. And from what I saw this season, Luke didn't seem to want to be with a woman who could make her own decisions without consulting him first.

I don't know if Luke learned from his mistakes this season or if Devin's speech will make a difference somewhere down the line. But everything Devin said to him needed to be said and it is likely what a lot of fans have been thinking all season. As soon as it became clear that Luke cared more about passing judgment on Hannah than supporting her every decision, Bachelorette fans knew he wasn't the guy for her.