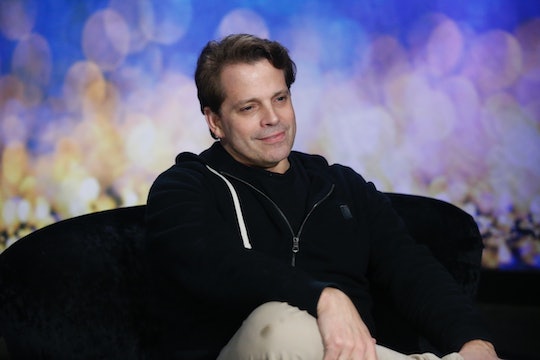 Big Brother is known for its twists each season, but the latest mystery has fans wondering where in the world Anthony is. Or, where in the Celebrity Big Brother world he went, because as live feed watchers have seen in the past couple of days, he has been absent from the house with very little spoken about his apparent exit. So fans are wondering if Anthony Scaramucci quit Celebrity Big Brother. The game has only just begun and his self-eviction would definitely alter some of the other houseguests’ futures since he was on the block for eviction.

Shortly after fans realized that Anthony was no longer on the live feeds, he was seen at a Skybridge conference in Switzerland, where he did address his absence from the Celebrity Big Brother house. According to The Hollywood Reporter, Anthony said that he had "a tremendous amount of fun" in the house, so he didn't likely leave because of any big disagreement with production.

His sudden exit, however, is unprecedented for the typically strict reality show. Even most of those who choose to leave early are often kept in sequester until they can serve as jury members at the end of the season. And the fact that Big Brother hasn't yet addressed Anthony's exit makes the situation all the more strange.

At the end of Wednesday's episode, it was announced that fans will be in for another shocking twist during Friday's episode. There's a good chance that Anthony's exit will then be explained, but in the meantime, fans and Mooch's fellow houseguests have theories of their own.

On the live feeds, some of the other houseguests theorized that Anthony was placed in the house as a mole to spy on them. I don't know what benefit that would serve on a show where almost everything is shown to the public, but it's not an impossible theory.

A fan on Twitter posted that they think Anthony asked producers to make his exit seem like a twist when he, in fact, quit on the spot. At this point, though, it's all speculation since no one has given any definite reason for Anthony leaving Celebrity Big Brother.

Anthony, who served as the White House communications director under President Trump for 11 days, only spent six in the Celebrity Big Brother house before he left. During the conference in Switzerland he did say that all would be revealed about his leave in an upcoming episode of Celebrity Big Brother and that he was bound by his contract to stay mum about the details. This could mean that it was always the plan for Anthony to pop in and then mysteriously leave, but producers may not have counted on him being put on the block for the first week's eviction.

Because Anthony is known for having such a short career in the White House, his short time in the Celebrity Big Brother house might have been meant as a way to play into that. Anthony said himself during the live feeds that he went on the show to gain a little love exposure rather than the big payout as the Celebrity Big Brother winner at the end of the four-week season. And at the Skybridge conference, he said, "You have to remember, I grew up in a blue-collar family, so you have to remember that America watches these shows. You don’t want to unplug yourself totally from America."

I wouldn't doubt that this was all planned ahead of time, but it's definitely a Celebrity Big Brother first. Let's hope that Anthony is right and fans will get the answers they need on the next episode Friday Jan. 25 at 8 p.m. ET.