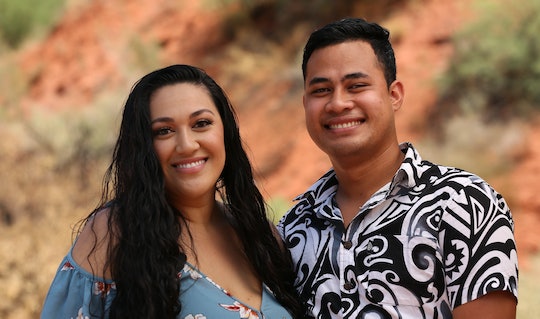 Kalani and Asuelu have drama coming at them from every direction on this season of 90 Day Fiancé. Asuelu moved to California from Samoa to be with Kalani and their son, Oliver, but since he's arrived, things haven't gone as smoothly as they'd hoped — namely, there are rumors that Asuelu had been unfaithful. Did Asuelu really cheat on Kalani?

On the show, Kalani told her sister Kolini (not to be confused with Kalani) that Asuelu cheated on Kalani when she was in California, pregnant with their baby. (Which, as Tristan Thompson knows, is the worst kind of cheating.) However, on the show Kalani then said when Asuelu slept with another woman, it was actually while he and Kalani were on a break. (And, as Ross Geller knows, while sleeping with another woman during a break from your girlfriend may not explicitly be against the rules, it's definitely not great.) So basically, the matter of Asuelu cheating is not black or white.

Now that he's in America, on 90 Day Fiancé, Asuelu is getting to know Kalani's family while spending time with them in Orange County, California. No matter the actual details of Asuelu sleeping with another girl, her family is still not entirely convinced that he's the best match for her. This is at least in part because before he arrived in America, Kalani's sister and mother picked up his slack by helping her raise baby Oliver. Now, they're not convinced he can step up as much as he needs to.

In an Instagram post obtained by Newsweek before she made the account private, Kalani defended Kolini, explaining why she resented Asuelu at first. “My sister WAS Oliver’s dad for his first five months. She watched him when I had to go back to work for Asuelu’s papers, she bought all of the s—t I didn’t get from my baby shower, and let me skip rent/bills when I had to buy his plane tickets for his interviews and doctor’s appointments," she wrote on Instagram. "Asuelu wasn’t paid in coconuts, dumbasses—he made $600 American a month, with no bills. As a sister, if you know you’re throwing downtime and money to help your nephew, and know that the father isn’t helping in ways that he could—YOU’D BE SALTY TOO!”

Additionally, Kalani's father expressed trepidation about welcoming Asuelu into the family. "You know how I feel about you being with my kind of people," he told his daughter on 90 Day Fiancé. "It's just the way I was born and raised ... it's a fast life here and it's a slow life there."

His comment received a lot of backlash since it seemed like he was discriminating against Samoans — even though he himself is Samoan — but Kalani assured fans that creative editing twisted his words. "Rule of thumb when watching reality TV: if you don’t see it being said, chances are it was spliced together," she wrote on Instagram.

On top of all that, Asuelu has a few other things working against him. In last week's episode, shortly after he arrived in Los Angeles, Kalani taught him how to change Oliver's diaper. He obliged, but in an interview with the camera, he said: "In Samoa, the moms taking care of the kids, so, I'm very surprised to change his diaper the first morning." Gender discrimination? Not cool, Asuelu.

Additionally, when Kalani picked him up at LAX, he performed a traditional Samoan dance (while topless) in the airport's lobby, which understandably embarrassed Kalani.

Asuelu has a few strikes against him at the moment, but hopefully by the end of the season, the couple will work everything out. That said, he does seem genuinely eager now to be a father to his young son and start a family so hopefully everything works out.