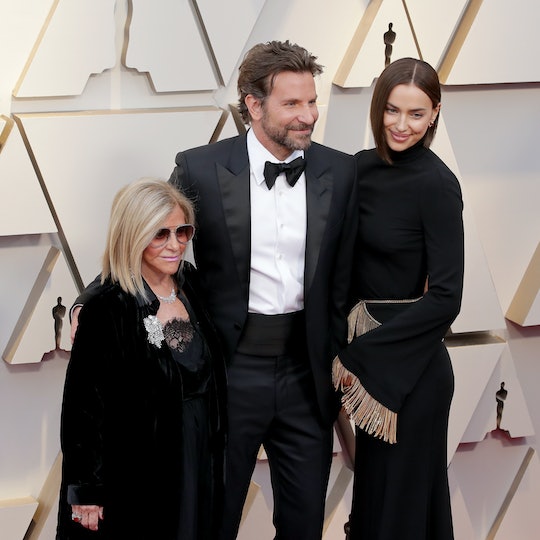 Bradley Cooper Is Melting Our Hearts With His Dates — Yes, Dates — At The 2019 Oscars

Couple-spotting is one of the best parts of red carpet events, and the Oscars provided no shortage of A-List PDA moments. Hollywood enthusiasts gave a collective cheer when Bradley Cooper arrived at the Oscars with Irina Shayk in tow. The duo rarely attend red carpet events together, with Cooper typically bringing his mom with him to awards shows instead (swoon), so fans were thrilled that the supermodel was by the Best Actor nominee's side as well as his mother, Gloria Campano, for his big night.

Cooper is an awards season regular, having racked up seven Academy Award nominations throughout his career, three of which he earned for his directorial debut and instant sensation A Star Is Born. But despite his frequent presence on the red carpet, the actor and director rarely brings his partner Shayk as his date, though they did break their usual privacy protocol when the supermodel accompanied Cooper to the Golden Globes in January.

It was the first awards ceremony show Cooper and Shayk attended as a couple since they became an item in 2015 according to E! News, just demonstrating one of the many ways they keep their lives out of the spotlight. But tonight, they were total #CoupleGoals at the 2019 Oscars.

Despite the big smiles they had together at the Globes, Cooper and Shayk prefer to keep their relationship out of the public eye, and they're arguably one of the most private couples in Hollywood. There are only a handful of images of the two out together, and they never share photos of their 1-year-old daughter, Seine, on social media. Seriously, the A-listers are so good at staying out of the spotlight that people aren't even sure if they're still just partners or if they've gotten secretly engaged or married.

Shayk has explained the importance of keeping her day-to-day out of the public eye to Glamour UK in early February 2019. "Because my work requires me to be out there, I just decided my personal life will be quiet," she told the magazine. "That’s why it’s called personal, because it’s something for you and your family, and I feel happy with it.”

The statement echoes Cooper's own thoughts on his personal life from an interview with Howard Stern in 2015, during which he said, "I just don't talk about certain things" as E! News reported.

So the couple's second break from their intentionally low-key relationship in a two-month period is surprising, but I guess your man being nominated for multiple Academy Awards and performing at the show are pretty good reasons to make an exception to your rule.

Cooper wore a classic black tuxedo and channeled his A Star Is Born character with an unshaven face and loose hair that screamed rock n' roll. The look was a change from his Golden Globe's style, where he rocked an all-white tuxedo as Vogue reported. Irina, too, kept up her high-fashion momentum from the Golden Globes, wearing a simple high-neck black dress with a golden belt for a fun touch.

Twitter was loving the couple's all black look, as well as Bradley's choice to bring his mom and their red carpet moment.

It was a thrill to see Cooper and Shayk together once more during awards season, but it's pretty clear those two are loving their life together whether they're on the red carpet or not.