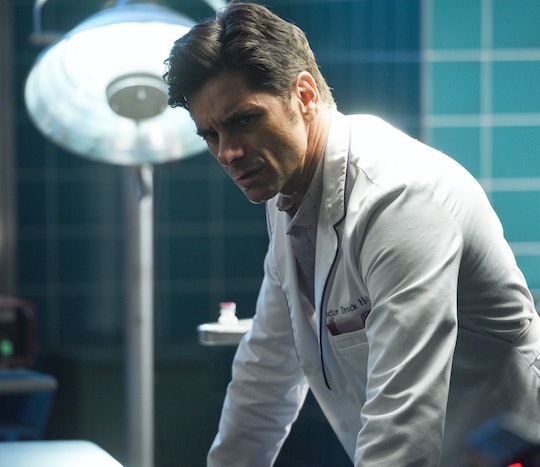 Did Brock Holt Kill Chad On 'Scream Queens'? He's The Only One With A Motive

If you haven't finished mourning the loss of our beloved Chad Radwell on Scream Queens just yet, we'll allow you a few more minutes to do so before thinking about the person behind his death. Because while it's totally possible that it was the Green Meanie, we also have every reason to suspect a certain handy doctor. See what I did there? So, did Brock Holt kill Chad on Scream Queens? Although Chad is basically the most adorable jerk ever, he also kind of had it coming with the way he'd behaved toward Dr. Brock since he arrived at the C.U.R.E. Institute — not to mention, he made a point of taking Chanel away from the sexy doctor.

Since we don't even yet know who the Green Meanie is on Scream Queens, though, it's hard to be able to point a confident finger at Dr. Brock for the murder of Chad. Obviously the two of them never got along, and were both vying for the affections of the same woman, but Dr. Brock seemed to be able to control his hand to an extent before things got too rough in any other situation and he doesn't seem to be a killer himself, so it probably wouldn't be fair to jump to conclusions just yet.

Still, this is Scream Queens, and the characters aren't always consistent with their temperaments. So, did Dr. Brock kill Chad on Scream Queens? There is a solid case for both sides of the theory.

All of the signs were there in front of us. He has the hand of a murderer — a hand that tries to continue on with the murdering, no less. He also hated Chad with a fiery passion, and when the groom-to-be asked for help with his bow tie, Brock almost choked him right then and there. And if you noticed, when Chad fell through the ceiling, all of the blood was around his neck, meaning that his murderer probably slit his throat and we've already seen Brock's fascination with throats. (Or, at least, the hand's fascination anyways.)

He was also noticeably absent from the wedding itself. Brock might not be a killer, as far as we know, but who's to say that his hand and his jealousy didn't combine into one deadly recipe for Chanel's new fiancé?

Brock Isn't A Killer, His Hand Just Comes From One

Brock's hand might be from a murderer, but that doesn't mean that he will act on any anger or jealousy, as he probably wouldn't have before he had a hand transplant. He's already proven himself able to control his wayward hand, no matter how much it seemed on a mission to become the next Addams Family Thing stand-in and have its way.

Brock might have wanted Chanel for himself and loathed Chad right away, but he also proved Chad right when the former fraternity brother pointed out that regardless of their differences, he wanted to see Chanel happy. And Brock returned that sentiment by saying that when the marriage ended six months down the line, he'd be there for Chanel. This indicates that he already knew the marriage wouldn't last and he wouldn't have long to wait to swoop in, so why would Brock kill Chad on Scream Queens?

Obviously it's much too soon to tell who the Green Meanie is and, as a result, too early to know if Brock did kill Chad, but as it stands, he is legitimately the only person in the hospital who has any motive for the crime.