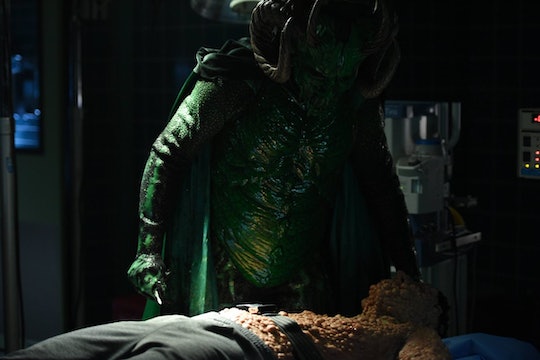 Well, it's officially that time again. Scream Queens and all of the murdering that comes along with it is in full swing and as Chanel announced at the end of Episode 2, we do indeed have another serial killer on our hands. But with it only being the third episode of the season, what do we even have to go off of to figure out who the new big bad is? There are some Scream Queens Green Meanie theories that explain why some characters are more likely to be the bad guys (or girls) this time around and, as usual, there are no shortage of suspects. Of course it doesn't help when you have Nurse Hoffel slinking through the hospital hallways, or Dr. Brock's wayward hand trying to be murderous on its own. But, like I said, there are plenty of people who could be the Green Meanie on Scream Queens and they all have their reasons.

Not only that, but there are Green Meanie theories that also explain why there is another killer in Season 2 of Scream Queens at all and what purpose they might hope to serve, terrorizing the hospital 30 or so years after the Halloween massacre at the same facility. Some of these Scream Queens Green Meanie theories in particular are more about figuring out the who and why of it all rather than pointing a finger at each character, but I'd be lying if I said that almost everyone doesn't at least seem like a suspect at this point.

There Is More Than One Green Meanie

This theory let's us go back to the setup of Season 1, where it turned out that the mysterious twins were the killers dressed up as Red Devils. Remember, just because it was done once, doesn't mean it can't be done again. If anything, fans may feel like their guard is down to believe there could be two Green Meanies — the perfect time for there to be such a reveal. The Scream movies had two killers in the first two movies and then the fourth, and just because audiences came to expect multiple killers, it didn't take away from the mystery of who they might be.

There are plenty of Scream Queens theories about the Green Meanie floating around that go back to Nurse Hoffel, including that she is either the pregnant woman from the hospital in 1985 or that she's the pill-popping nurse from the flashback who we eventually learned survived. Either theory puts Hoffel in a position to be aiding the Green Meanie, since the pregnant wife of the dying patient would want revenge on the hospital and the nurse would want to help based on the fact that all of her friends and colleagues (including kind of boyfriend Dr. Mike) were murdered in front of her. Also, Hoffel has been seen time and again with bottles of pills, so going with the dark comedy of Scream Queens, she could even be helping the killer because she was promised an endless supply and access to painkillers.

The Green Meanie Will Be Connected To The First Season

Season 2 of Scream Queens is pretty much a stand alone, viewer-friendly season that doesn't really require viewers to know what happened in the first season. But how perfectly dramatic would it be to have this season's killer linked to the first season? Obviously there wasn't a third baby born along with Hester and Boone, but having that connection to the first season will make for much larger WTF moments this season and a satisfying reveal at the end.

There is nowhere near enough attention being place on the happy and too cheerful candy striper. He supposedly answered a Craigslist add stating that the C.U.R.E. Institute needed an upbeat candy striper in a unpaid position and he jumped at the chance. But maybe this was because he needed an 'in' at the new hospital where his dad was killed in the swamp 30 years ago, making him the mysterious baby boy the wife was pregnant with. Even if he isn't the baby all grown up, though, there is way more to Chamberlain than we've gotten so far. After all, he's the one who found the decapitated patient and Chanel #5 after the Green Meanie made an appearance at the end of Episode 2.

We already saw that there was a Green Meanie in the 1985 flashback, who murdered all of the doctors and staff of the hospital, but if that same killer is the person terrorizing the new hospital today, that would make him or her likely around 60 or so years old and that doesn't fit too well with the scheme of the show. Instead, the killer from the Halloween massacre might be someone linked to the present-day Green Meanie, possibly related or maybe just with the same common goal.

Hester Knows More Than Anyone Else

As we've already seen from the scene inside Hester's maximum security basement cell, she's gone full Hannibal Hester. She told Dean Munsch and the others that all of the clues they needed were right in front of them and even admitted that she knew what they were, from her basement cell. In the drawn photos on the wall behind her, you can just barely make out a building with a lake in front of it, which could be the hospital and the swamp, but how could she possibly know of any of that if she'd been locked up since before Munsch had purchased the hospital? She could be working with someone already in the hospital, who'd been corresponding with her via letters.

The Killer Will Be Partnered With A Returning Character

If there are indeed two Green Meanies on Scream Queens, then it would make most sense for one of them to be someone linked directly to the hospital, who is a new character, and one of the returning characters. That way, we get the motive along with the dramatic reveal that will mean something more than just getting rid of a new character we likely aren't even that invested in.

The Scream Queens Green Meanie theories are likely just going to keep coming as the season goes on, but it's never too early to speculate, especially since we already have plenty of shady characters to choose from as it is.