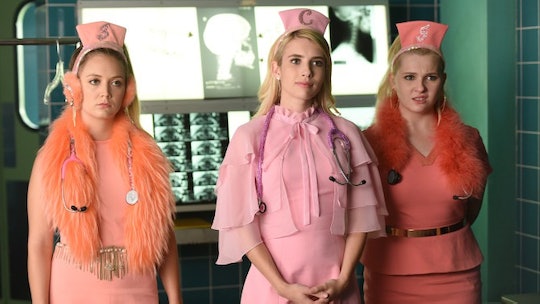 At this point, primetime on FOX wouldn't be complete without some creation from Ryan Murphy, so it was a relief when Season 2 of Scream Queens premiered Tuesday night to bring back all of the comedy, horror, and one-liners that make it possible to dislike each of the characters at least a little bit. But with a new season also comes all of the Scream Queens Season 2 theories about pretty much every aspect of the show so far and what the season ahead of us will entail.

Instead of the Red Devil, we have what is now being referred to as the Green Devil (name fits), and a whole new setting with new mysterious characters trying to shake things up for the Chanels. Season 2 has only had one episode so far, but it started it's second season off right. Already the gears are turning in the minds of Scream Queens fans everywhere about who did what, why characters seem to be almost supernatural, and how the Chanels keep somehow escaping certain death.

Obviously a big mystery of Season 2 of Scream Queens is going to be the identity of the man or woman behind the green creature costume that was featured in the beginning of the episode, but the Scream Queens Season 2 theories are delving much deeper than that.

At the beginning of the Season 2 premiere, we saw Halloween night in 1985 at the same hospital Munsch bought and revamped in present day. When the blonde woman is standing over her husband in his hospital bed, he asks how their boy is doing. Also, if you look at the scene again, you'll notice that her husband and Cassidy look enough alike to be related and the 1985 birth date coincides with Cassidy's possible age.

Chad (Glen Powell) Is The Killer

In the promo for the second episode, we see Chad returning to the show. In Season 1, he was the airhead boyfriend of Chanel and then brief love interest of Denise Hemphill. The reason for his return is unknown at this point, but if there are two killers, the other could have easily convinced him to work alongside them. He seems pretty much game for anything.

Brock Holt (John Stamos) Has The Hand Of A Killer

This one is pretty obvious, since he was the recipient of a hand transplant and the thing seems to have a mind of its own. I.e. reaching up to grasp Chanel's throat before Brock grabbed it with his other hand and slammed it down. But if it's the hand of a killer, is is possible that it's leading Brock to commit murders himself?

There's More Than One Killer

I know, it's been done. But having more than one killer makes it so much more possible to be surprised when the big reveal comes. It also makes it possible for the two killers to each be one important killer with a motive and one more impressionable lackey.

The purpose of Ingrid so far is unclear, if not to have another competent doctor in the hospital and one to shoot down the Chanels at every turn. But if she is the wife of the man who was throw into the green swamp at the beginning of the show, she could be back to get revenge on those in the hospital. Keep in mind that we haven't yet seen more staff members, so there very well could be returning staff from when the hospital was in service before.

Cassidy Cascade Is Either A Vampire Or Reincarnated

Yes, the vampire gag might be overdoing it, but all of the Twilight references with Cassidy's cold skin and love of death make the possibility of him being a vampire almost glaringly obvious. The other option, though, is that he died but was brought back to life. Maybe, if Alley does play his mother and she's a real doctor, she's the one who brought him back. (Nothing seems to be off-limits on this show.)

Dean Munsch Is The Green Devil

She's been accused before and has proven herself to be more or less good, as far as the moral spectrum on Scream Queens goes, but there's still no set reason why she bought the hospital and why she hired the Chanels of all people to help her run the place. Her motives are still unclear, so it's plenty possible to suspect that she lured the girls there to frighten them into submission or to try and kill them off.

Grace And Her Dad Returned As The Killers

So this might be wishful thinking in the strongest sense of the phrase, but if Grace and her dad returned to Scream Queens, though, there has been no news about either actor's return to the series. It would make for a serious shocker. The premise of the two of them being killers could be that they both went crazy after all of the mayhem from the first season and have now returned to enact rage, or something to that dramatic effect.

Skyler Samuels (Grace) did say that she would be open to returning for Season 2 of Scream Queens, but they haven't even mentioned her character yet. This could be to make us totally forget about her because she's no longer needed, or it could mean that we're supposed to forget so we're that much more surprised. Either way, Scream Queens Season 2 and the theories already surrounding it are pretty much what we hoped and expected to get.