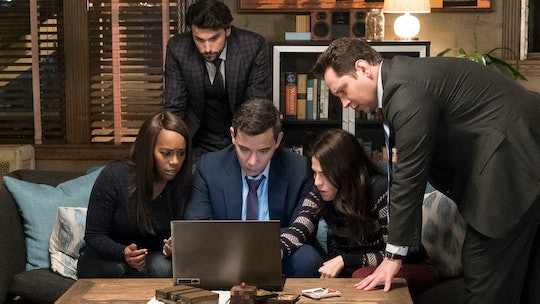 Hold Up: Did Emmett Actually Kill Nate Sr. On 'HTGAWM'?

With only two new episodes away from the How to Get Away With Murder Season 5 finale, there's still plenty to unpack. In "Where Are Your Parents," Gov. Birkhead told Annalise that she had nothing to do with Miller's or Nate Senior's deaths. She also claimed that Emmett Crawford killed Nate Sr. But can Birkhead be trusted when Annalise was going to pin the murder on the governor just a few moments earlier? Naturally, the fans took it to the internet to spell out their disbelief, forming theories on who murdered Nate Sr. in HTGAWM. While not every theory will spell out what Annalise discovers in "Make Me the Enemy," at least one is bound to be close enough.

The reason why Emmett's involvement in the murder seems so unlikely is because Emmett has proven himself to be a strong ally to Annalise. He offered Annalise a job at Caplan & Gold. He did everything he could to keep her at the firm. He then continued to believe in and support her throughout the season. So, what would be Emmett's motive for killing Nate's father, who was also close to Annalise? Why would he want blood of an innocent man on his hands? What would Emmett have to gain?

While it can be difficult to believe that Emmett was involved with the murder, then there is still a chance that Gov. Birkhead is telling the truth. In a discussion on Reddit, user SaltyBac0n claimed that while there still needs to be some background on the story between Emmett and Birkhead, it's possible that he did it to get Annalise to come back to Caplan & Gold. After all, he was notably upset when Annalise left.

"When Annalise left C&G to work for Birkhead, Emmett was p*issed and called security," the Reddit user wrote. "He may have gotten Nate Sr. killed to get back at Annalise to make her believe that the governor set her up ultimately sending Annalise back to working for Emmett, and throwing the blame to someone he dislikes very much so."

While this theory could potentially explain Emmett's motive, osterlay, another Reddit user, posed an important counterpoint: "Why would Emmett launch a hit on Nate Sr. over a partner quitting? Sure he was angry but that’s because Annalise leaving made him look like a fool to the other partners and the board."

Not convinced that Emmett did the deed? These theories explain who else might be responsible.

More Like This
'Workin' Moms' Has An Official Release Date For Its Final Season
14 Baby Names Inspired By 'The White Lotus' That Deserve A Round Of Aperol Spritzes
20 Heartwarming Episodes To Help Prepare Your Child For A New Sibling
'Virgin River' Has Wrapped Filming Season 5 & OMG Is Charmaine Still Pregnant!?