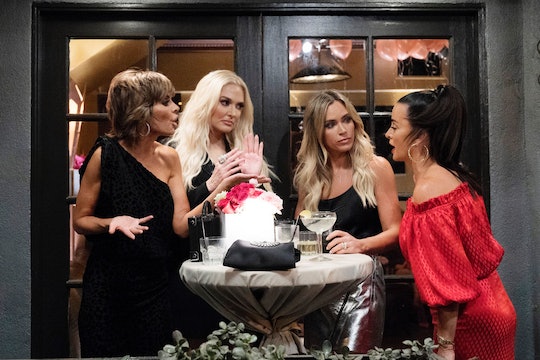 The 2018 wildfires of California were the worst recorded collection of forest fires on record and contained a ton of different fires that started and spread across California, leaving behind almost two million acres of burned destruction in their path, which included both land and homes. The fires also resulted in billions of dollars worth of damage and displaced many people who had to evacuate and couldn’t return to their homes until the fires receded or eventually had no homes to return to.

At the time, RHOBH star Denise Richards took to Instagram to let everyone know that she and her family were safe after evacuating their home, which took hours to do. She later posted again about being able to rescue their pets and a neighbor’s pets to allow the animals to evacuate the homes too.

Although Denise’s home wasn't in shambles and she and her family were lucky enough to evacuate to safety, the ordeal forced her to cancel a planned trip to France with the rest of the RHOBH cast. Luckily, Denise didn't return home to devastation on their own property, but it could have gone a lot differently. It took a while for Denise and her family to get back to their home and they even spent Christmas in a hotel because of the California forest fires. Judging by Instagram, however, they were back in their home by February and the house seemed to have minimal damage, if any. Some of Denise’s co-stars weren't so lucky, however.

Camille Grammer’s home was completely destroyed in the fires, though firefighters were able to salvage some of her personal and important possessions and even her cars. Despite the devastating loss, Camille wrote on Instagram that she was grateful for her neighbors and the local police department for keeping her informed and enforcing the mandatory evacuation, which kept Camille and her family safe during the fires.

Former RHOBH star Eileen Davidson was also affected by the fires, although, she tweeted, she returned home to a house still intact. "After living for 24 hours thinking we lost our house completely we found out yesterday that we only lost the yard around our house," she wrote on Twitter at the time. "Sweating it out for the next 48 hours and praying for everybody involved in this devastating and horrific fire. Love to all of you."

Although it doesn't look like Lisa Vanderpump’s home was affected by the forest fires, she did organize relief efforts at the time. She actively collected supplies for both humans and dogs at her rescue center and received an influx of shelter dogs because of the fires. Because of the RHOBH stars’ locations, thing could have been a lot worse all around, so Camille was arguably the most and worst affected by the forest fires last year.

Luckily, it seems like none of the RHOBH stars were hurt during the fires and even if they lost their homes or some of their belongings, they came out of the ordeal physically unharmed. It was still a stressful and likely terrifying experience nonetheless and I expect the women to be open about it this season on RHOBH.