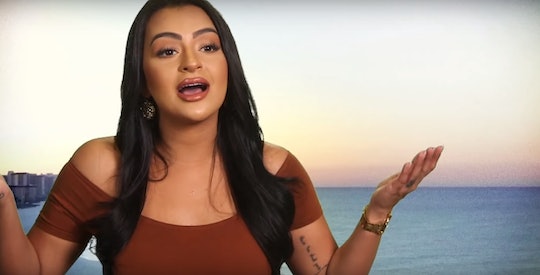 Gus & Nilsa's Future Outside Of 'Floribama Shore' Is Unclear

Gus and Nilsa are like the Ross and Rachel of Floribama Shore, except with less 13-page post-breakup letters and the ongoing gag that one of them may or may not have cheated while on a break from their relationship. They are *the* on again/off again couple of the show and after their recent ups and downs in Mexico, fans are probably asking, did Gus and Nilsa ever officially date? Floribama Shore probably doesn't show everything about their relationship, so there’s a good chance that they might have hooked up or at least hung out outside of the show.

As far as an actual relationship goes, however, that remains uncertain. While most of the cast regularly sees each other outside of the show now that they’re like extended family from one another, there haven't been many social media posts of just Gus and Nilsa together. In fact, shortly after Season 2 finished filming, there were rumors that Gus was dating Teen Mom 2 star Briana DeJesus. Neither confirmed the rumors and since then, there hasn't really been any concrete evidence. So if Gus and Nilsa took their relationship outside of the beach house, there's no way to really prove it right now.

Early in December, Nilsa did tease to Entertainment Tonight that there would be more to come of the Gus and Nilsa saga before it even began to come to an end. "Let’s just say that this ship has not sailed yet," she revealed. "If you think that this was a rollercoaster, just wait." It could be that she was referring to everything that went down in before and during the cast’s trip to Cabo on Floribama Shore, because there was plenty more to fuel fans’ concerns about their relationship.

Nilsa finally accepted that Gus wanted his space and she gave it to him. In doing so, it seemed to make Gus want to get closer to her and when he complained that things seemed weird, it was confusing all around. They seemed like they were both on the road to sleeping it off with someone else, but eventually decide to cuddle up to each other for the rest of the Cabo trip. This is after Gus repeatedly claimed to want his space, mind you.

Obviously it’s a recipe for more flirting, fighting, and jealousy between Gus and Nilsa. In a way, I think it stems from a place of the housemates wanting to be with each other but still having their own reservations. Then again, it could just be that whenever they’re thrown together on the show, it’s easier to give in to their feelings than when they’re out in the real world away from the cameras.

If I had to guess, I’d say that Gus and Nilsa’s relationship is mostly contained to the Floribama Shore house. If they ever got together and officially became a thing outside of the show, chances are, fans would know about it right away. Similar to the original Jersey Shore’s main couple, Sam and Ron, whose former relationship was made public when they were on the show as well as off. I’d love for Gus and Nilsa to be the much more mature and stable version of Sam and Ron, but it doesn't look like they’ve officially been a thing other than during filming.

Nilsa and Gus might just be experts at hiding that part of their lives, but all signs point to the on again/off again pair being off more often than not. Don’t be too disappointed, though. As long as there are seasons of Floribama Shore, there are chances that Nilsa and Gus could make it official.