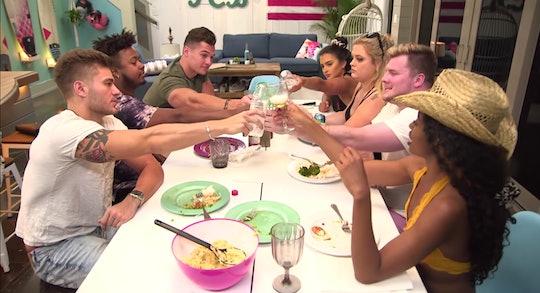 The 'Floribama Shore' Cast Posts So Many #FriendGoals Instagram Photos Together

With the second (and drama-filled) season of Floribama Shore about to wrap up, viewers are wondering what the cast is like in real life, away from the cameras. For example, are the Floribama Shore cast friends in real life As the revamped version of Jersey Shore, MTV's Floribama Shore had a lot to live up to when it premiered in November 2017. The show chronicles a group of young adults living in a house together on the Gulf Coast at Panama City Beach, according to MTV's website. The beach is located on the Florida Panhandle, and it stretches all the way up to Alabama, hence the portmanteau "Floribama."

Floribama Shore stars eight young people: Aimee, Candace, Codi, Gus, Jeremiah, Kirk, Kortni, and Nilsa. To determine what the gang's relationships with each other are like in real life, one must turn to 2018's encyclopedia: Instagram. Most of the cast has acquired more than 100,000 followers since Floribama Shore premiered — and that's no surprise, considering how often they all post photos related to the show. Just this weekend, Aimee shared a picture with Floribama Shore's Candace, in which the two women are holding hands and smiling for the camera. "Really missing my [Candace]," Aimee captioned the shot. Looks like Aimee and Candace really are good friends IRL!

Last month, Aimee, Nilsa, and Kortni teamed up to host a party at a private bar on the Florida panhandle. Aimee shared a poster promoting the event on her Instagram, and then on the night of the party, she shared a selfie with Nilsa.

Last month, Nilsa, Kortni, and Gus hosted a party at a resort, and all three of them shared photos of themselves on Instagram.

In July, Gus dedicated a sweet Instagram post to Kortni on her 23rd birthday. "Happy birthday to the one that drove me completely crazy but also kept me sane at the same time while living in the beach house," he wrote. "Love you always girly."

Codi has also posted photos of himself hanging with Gus and Jeremiah.

Additionally, Jeremiah recently moved to Arizona, where Gus spends half his time, according to his Insta bio. "Arizona has been an amazing move and experience, but the one thing that makes it amazing is who you’re with," Jeremiah captioned a photo on Instagram. "I’m grateful to say that I have @joshua_buoni and @guscalebsmyrnios here with me! To Family!!!"

In July, Nilsa shared what looks like a screenshot from Floribama Shore of her and Codi hugging. "As long as you never palm my face, I’ll never throw a drink in your face again🤗 love you [Codi]," she captioned the picture.

In June, the cast traveled to New York City together, and Gus and Candace shared a few photos from a night out at a rooftop bar.

Also during the group's NYC trip, Codi shared a few photos of the gang at a Mets game at Citi Field.

Based on the above photos, it's clear that the Floribama Shore cast is friends with each other outside the shore house as well as in. Will they become as close as the original Jersey Shore cast clearly has? It's too early to tell, but it definitely looks that way.

Now, after tonight's finale airs on MTV, I will be crossing my fingers for a third season.