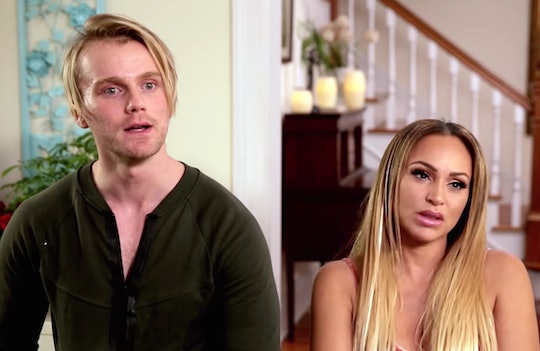 Things were smooth sailing for 90 Day Fiancé stars Darcey Silva, 43, and Jesse Meester, 24, when they first connected via a dating app. But once Jesse traveled from Amsterdam to Connecticut to get to know his bae and her everyday life, things didn't go as planned, and they broke up on the show. Since the breakup was likely filmed months ago, viewers are itching to know: Did Jesse & Darcey get back together on 90 Day Fiancé: Before The 90 Days?

On Sept. 10, 90 Day Fiancé: Before The 90 Days aired an episode called "Just A Try." A high point (or low point, if you were there) of the episode was a huge fight between Darcey and Jesse — over the stupidest things. As explained in an episode recap by Reality Tea, Jesse behaved like a stubborn 5-year-old while eating dinner with Darcey and her twin pre-teens. He and Darcey had fought over how to cook the steak, and by the time dinner rolled around, he had yet to cool down. He wouldn't take a bite of the steak — or even the dessert! Then, Darcey stepped on one of Jesse's shoes, prompting an even bigger fight, with accusations of shoe-throwing flying all over the place.

After dinner, Jesse and Darcey sat down in front of the cameras to talk about their relationship. In the clip, which TLC titled "Darcey and Jesse Break Up" on YouTube, the two argued about their issues. As Darcey's emotions ran high, Jesse remained stoic. "It's always going to be something," Darcey said in the clip. "My gut is telling me to walk away." Once she uttered those words, Jesse finally began to cry.

"I tried my best, but it is not possible for me to be in something that is deceptive and is not real," Jesse said. "I really love her with all my heart, and that's why this hurts so much." Darcey said that his tears showed her that he "at least he cared a little bit."

Then, in the most recent episode, "Truth or Lie," Darcey drove Jesse to the airport to head back to Amsterdam. As the couple sat in bumper-to-bumper traffic, they bickered and bickered, despite Darcey telling the cameras she wanted their last hours together to be peaceful.

However, once they arrived at the airport, Jesse lifted Darcey up in his arms and they passionately kissed goodbye. They told each other they loved each other during their embrace, and Darcey even ran back into the airport to give him one last kiss (well, many last kisses) and to tell him "You have my heart forever." All this after an hour long drive of Jesse scolding Darcey for traffic that was out of her control.

"The next time we see each other, it's either going to have to be a proposal, or I move on," Darcey told the cameras in the next shot.

So even though Darcey and Jesse's breakup seemed pretty official in the previous episode, this most recent episode makes it seem like they may have gotten back together. Since that's all the information the show is giving fans, I must turn to another source...

As any millennial knows, the best way to investigate a breakup in 2018 is to check Instagram. Jesse's Instagram is completely Darcey-free, and just filled with modeling photos. Darcey set her Instagram to private, so fans can't see if she has been sharing photos with Jesse or not. Womp-womp.

And, as millennials also know, the second-best way to investigate a breakup in 2018 is to listen to a few podcasts. (Bear with me.) Last month, Jesse appeared on the podcast Reality Life with Kate Casey, where he all but admitted that he curated his persona for 90 Day Fiancé: Before The 90 Days. He said on the podcast:

So whatever perception I give you, whatever is on the show or whatever narrative you get from social media is just what I want you to see. And for me, when it comes to a relationship I don’t care what you do in [the] entertainment industry as far as faking everything, but I expect you, if I fall in love with you, to be real with me. I don’t want to fall in love with a facade, with a fake reality and that’s kind of what I was experiencing.

Ouch. Jesse definitely does not deserve to be with Darcey after those comments. Hopefully future episodes of 90 Day Fiancé: Before The 90 Days will continue to fill fans in on Jesse and Darcey's relationship.