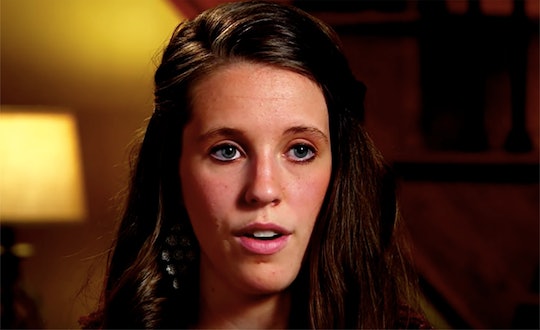 Following the birth of Joy-Anna Duggar's son, Gideon Martyn Forsyth, on Friday, many members of the Duggar family took to social media to celebrate the exciting news. And one of the first people to congratulate Joy-Anna and her husband, Austin Forsyth, was Jill Duggar. Jill, who is arguably the closest to Joy-Anna, penned a sweet Facebook post on Monday characterizing the new parents as a "great" team while also making note of Gideon's impressive size (10 lbs!). But while the note might seem innocent upon first glance, some Counting On fans think Jill might have spilled the beans on another Duggar pregnancy in the last few words of her message. So, did Jill Duggar reveal another Duggar's pregnancy? See the compelling evidence for yourself.

Now that six out of the 19 Duggar kids are married, fans have come to expect a pregnant announcement every few months. In 2017, Joy-Anna and Kendra Duggar revealed their pregnancies within four months of each other, and Jinger Duggar shared her baby news with the world just a few days into 2018. And when you consider the Duggar brood is procreating at a very fast rate, it's no surprise fans are always on the lookout for more baby news. In fact, Counting On loyalists are grade A detectives when it comes to analyzing supposed pregnancy clues.

As for the most recent "clue" fans are clinging to, look no further than Jill's congratulations message to Joy-Anna. "Congratulations Austin and Joy on the birth of little (big) Gideon Martyn," Jill wrote, according to Facebook. "Y’all are already a great parenting team! 1 cousin arrived for 2018... at least 3 more to come!"

Umm, did anyone else catch Jill's mention that "3 more" cousins are on the way? When you consider that Jinger and Kendra are the only confirmed Duggar pregnancies at the moment, one has to wonder who the last pregnancy is referring to. Either a typo is to blame here or there's a good chance another person in Jill's family is pregnant.

"Kendra and Jinger make 2 more. Who is number 3," one fan wrote. "Three??? Did yall just spill some beans you weren't supposed to?" someone else asked. Jinger, joe, and who's the 3rd? I missed an announcement somewhere," another person chimed in.

Going off the theory that another Duggar is expecting, the only reasonable possibilities are: Jill, Jessa, and Anna Duggar. Although there have been rumors that Jill is pregnant again (prenatal vitamins on her nightstand, a curious Instagram hashtag, etc.), I think she would be more careful about safeguarding her own pregnancy news. As for Jessa, who gave birth to her second son in February 2017, this remains a possible option. And in terms of Anna, who welcomed her fifth child in September 2017, she's also a potential candidate.

But what if Jill's message wasn't directed at anyone in the Duggar family? Some fans suspect Jill was talking about her sister-in-law, Deena Dillard, who is married to Derick Dillard's brother, Dan Dillard.

"No Jessa is not expecting again, its Derick's brother and his wife," one person argued. "It's a Dillard Post people, not The Duggars! Kendra and Ginger on the Duggars side and Derrick's Brothers wife on the Dillard side, 2+1=3," another fan added. And one particularly irritated person wrote: "Great way to start rumors Dillard's. You better clarify to these people."

Of course, Jill doesn't have to "clarify" anything to anyone and it's unlikely she'll respond to her curious fans. What is clear, however, is that 2018 will feature many more Duggar (and Dillard) babies. Jinger is likely due sometime in July, and it's rumored that Kendra will give birth in June. And if another Duggar is on the way, that's just more good news.