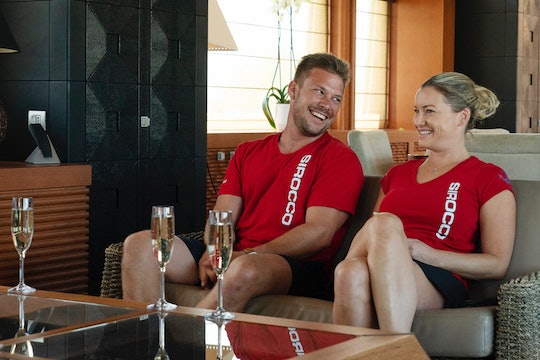 In one episode, Hannah brings up how João told her he was jealous of her kissing Travis. She asks if he meant it and he says no, but she doesn't seem ready to let it go. As they engage in some obvious flirting, she says his comment about being jealous "freaked [her] out." It honestly seems like the negative tension that was once between them has been replaced by sexual tension and it is making fans curious about their past together and if they ever got closer.

In previous seasons, Hannah wasn't shy about her feelings regarding João. She even risked her friendship with Brooke to warn her about dating the yacht bosun. She tried to tell Brooke about the way João had treated her and how they never got along, but Brooke decided to date him anyway and it caused a rift between them. Now, it doesn't really matter because João and Brooke are no longer together, and Hannah and João have also turned over a new leaf.

It’s easy to confuse their flirting for something more, especially since it is so opposite of the relationship they had before. But right now, there isn't any evidence of a late night, off-duty hook up between the chief stewardess and the bosun. That doesn't mean nothing happened, however. Somehow, Hannah and João went from throwing insults at each other (and getting pretty personal with them) to talking about jealousy with other people and holding hands. They had to have gotten from one point to the other in some way and there could have been a secret hook up in the middle of all of this.

If João and Hannah did hook up on Below Deck Mediterranean, it’s more than likely that nothing came of it afterward. Right now on João’s Instagram, he has several pictures with someone who seems to be his girlfriend. Their photos have captions like "What a feeling, to be gifted with a beautiful soul to dance our days away together" and "girl of my dreams," so it's pretty official.

It doesn't look like Hannah is dating anyone right now, but in February she did post a Valentine’s Day photo on Instagram with a dog and two glasses of champagne with the caption, "Me and BAE enjoying a cheeky champagne for Valentines Day! Hope all you lovers out there have an amazing day." In the comments, she said the dog belonged to her boyfriend. So whether or not she’s still with this mystery man, it looks like Hannah and João are living happily apart from one another romantically.

If Hannah and João hooked up on Below Deck Mediterranean, it wouldn't come as a surprise to many fans. It is typical of the young and single members of the crew to flirt and hook up with each other on their down time. When they are docked somewhere for the day where they don't know anyone, what else is there to do?

For now, neither Hannah nor João has said anything about getting closer than they already are. If they did make use of their off hours with each other, it likely didn't lead to anything more. The good news is that at least they are no longer warring with each other, which is a miracle in itself.

Below Deck Mediterranean airs on Mondays at 9 p.m. ET on Bravo.