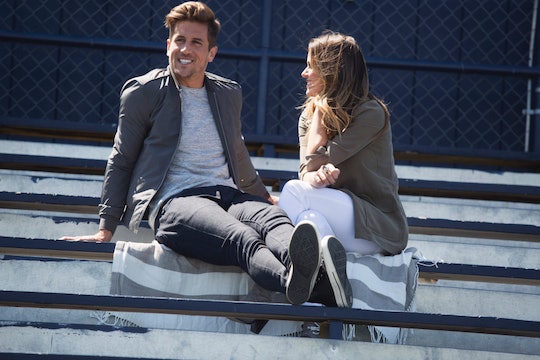 Did Jordan & JoJo Have Sex On 'The Bachelorette'? The Fantasy Suite Is Off Limits To Us

One of the only times a Bachelorette and her suitors can be truly alone on the show, away from prying cameras and judgmental viewers, is when they embark on the fantasy suite dates. And really, that's how it should be, but with it coming down to crunch time, it's hard not to wonder: did Jordan and JoJo have sex on The Bachelorette? I know, I know, we'll never know for sure, but it's something fans will speculate on, since we aren't given any insight into the fantasy suite dates where it counts.

In Monday's episode, JoJo took her remaining guys on individual fantasy dates, giving her a chance to be alone with each of them and get to know them in a way that isn't in front of the cameras, as it had been for the past few months. Whether or not JoJo and Jordan had sex in the fantasy suite isn't that important in the grand scheme of things on The Bachelorette, as it's kind of just another date, but the fact that they get to hang out without being watched does make the date important.

Obviously we would all like to know what went down on that romantic bed and in that sexy hot tub, but haven't we seen enough making out from JoJo and her favorite contestants to be enough? The important thing here is the endgame and who will be the final two men for JoJo to choose from. Never mind that whoever she gives the final rose to will likely be her fiancé, because no pressure there or anything.

As with anytime a Bachelor or Bachelorette has a fantasy suite date on the show, there is speculation as to what happens once the cameras have to slip out and the couple draws the curtains to a dramatic close. And you're totally allowed to wonder if Jordan slept with JoJo on The Bachelorette, or how far she gets with any of the other final guys. But it's also none of viewers' business, since knowing if JoJo gets busy with any of these guys isn't really necessary to knowing if you still want to root for said guys. It's about the connection, right?

Judging by what we've seen so far on The Bachelorette, JoJo has real chemistry with Jordan, so it's not totally wild to assume that they did have sex on the fantasy suite date, but either way, it probably makes sense to support the would-be couple. It's hard enough to live up to the romance novel-esque Luke, so just making it to these special dates is kind of amazing for the other guys. And by the way, it was by no means JoJo's "duty" to sleep with Jordan or any other contestant she takes into the fantasy suite; let's shut down that assumption right now.