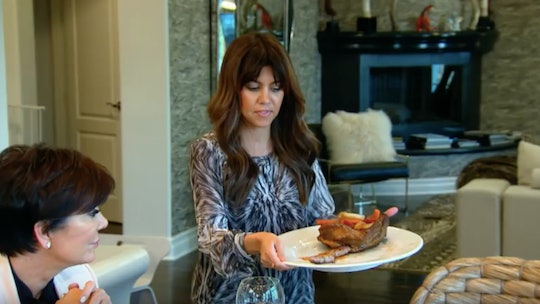 After months of little to no information about Khloé Kardashian's pregnancy, now fans are getting to know everything, right down to the fact that she plans on encapsulating her placenta after birth and "eating" her placenta in pill form, according to the most recent episode of Keeping Up With The Kardashians. Khloé shared the news with big sister Kim, who also ate her placenta after giving birth to Saint. As the most all-natural, all-holistic woman in the family, did Kourtney Kardashian eat her placenta, too?

Of course she did, but it took her a while to come around to the idea. Kourtney is all about trying anything that might have health benefits, which some believe placenta pills do. Despite her reputation for living as green and health conscious as possible, it was Kim who first tried it out. But it was quite the placenta-eating journey for both sisters.

Kim did not take placenta pills after giving birth to North, but she wrote on her blog that she wanted to with Saint. She wrote back in 2015, "I really didn't want the baby blues and thought I can't go wrong with taking a pill made of my own hormones — made by me, for me. I started researching and read about so many moms who felt this same way and said the overall healing process was so much easier."

It took her a long time to make that decision, though, as she toyed with the idea of eating her placenta years earlier when she was pregnant with North. Back in a classic 2013 episode (this is also the one where Rob takes up chainsawing, so you should totally look it up), Kim floated the idea at dinner with her family, with the support of her sister Kourtney.

Although Scott Disick, Caitlyn Jenner, family friend Jonathan Cheban, and their mom Kris Jenner were disgusted by the idea, Kourtney defended her sister. She even went as far as to say that she missed out on making placenta pills with her first two kids, Mason and Penelope, and wanted to "have a third kid just to eat the placenta." But everyone else at the table was straight up grossed out.

Because the Kardashians love pranking each other, Kim and Kourt got their personal chef to cook up some "placenta" with a "ton of flavor" to serve to Kris, Caitlyn, Jonathan, and Scott, who was sort of in on the joke, at another dinner.

With the first bite, everyone was visibly disgusted, but pretended to like how "tough" it was, because they didn't want to hurt Kourtney's feelings. That was way before Kim and Kourtney finally broke their silence and told them that it was highly seasoned placenta with some veggies. Caitlyn called them "sick" and likened it to cannibalism. Jonathan was about to puke.

The kicker? It was just terribly cooked beef brisket. "'We didn’t really feed them placenta. The longer they think they’ve eaten placenta, the better," Kourtney said, which is just the cruelest thing ever.

Offscreen though, Kourtney doesn't think taking placenta pills is a joke. Kourtney did "eat" placenta after giving birth to baby Reign (I'm just going to assume there were other reasons for having him other than encapsulating her placenta). She posted the pictures of her pills on Instagram and wrote, ""Yummy...PLACENTA pills! No joke...I will be sad when my placenta pills run out. They are life changing! #benefits #lookitup."

However, be warned that various studies have shown that eating your placenta after giving birth actually has no health benefits, though there's a ton of anecdotal evidence out there that it relieves postpartum depression, boosts milk production, and even helps your skin look great at a time when you're probably sleeping and hydrating the least.

Recently, the Centers for Disease Control and Prevention reported that the dehydration procedure to get the pills might not be enough to prevent infections being transmitted to your baby if you're breastfeeding and taking them, even though most companies that perform the procedure ask women to disclose things like HIV, hepatitis, herpes, chlamydia, syphilis, and Lyme disease.

If you're thinking about it, you should talk to your doctor and come to your own decision about consuming your own organs. But whether you encapsulate your placenta or try to eat it raw like some brave souls, know that the Kardashian sisters are all about it. Just don't try tricking any family members into eating some — that's seriously only something Kourtney Kardashian can get away with.