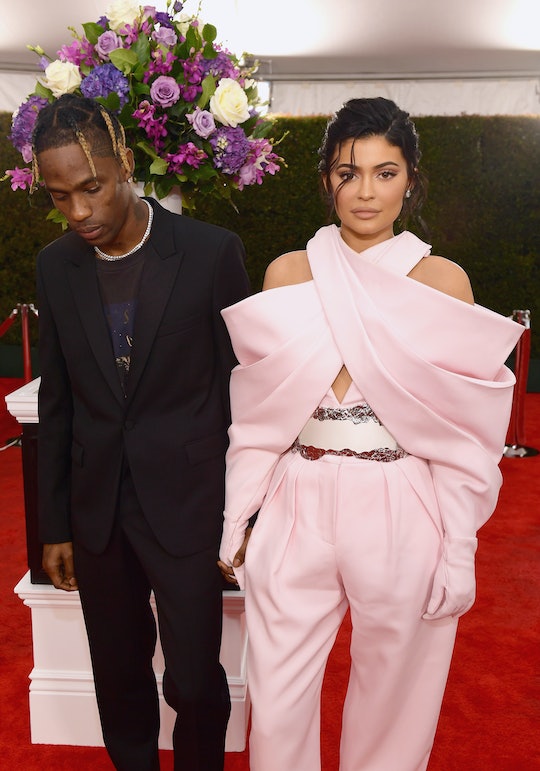 The 2019 Grammy Awards mark a big night for rapper Travis Scott. Not only is he nominated for several awards, but he also landed a performance spot on Sunday night. With all that said, it's only to fair to assume that his partner and mother of his daughter was by his side all night long. But what about their adorable 1-year-old? Did Kylie Jenner bring Stormi to the Grammys with her?

Although Stormi has gone on tour with her dad before and was watching Scott perform from backstage on TV at the 2019 Super Bowl, given the layout for the Grammys — i.e. the fact that Jenner and Scott would be sitting in the audience for several hours with a bunch of adults, which is not an entirely conducive set-up for a little one — it seems that the couple decided to let Stormi sit this one out and watch from home, like the rest of us.

Even if Stormi wasn't with her parents at the Grammys, the adorable family had a memorable night on Saturday. As Jenner shared on her Instagram Story throughout the night, according to Us Weekly, both she and Scott hosted an epic party for Stormi's first birthday. And epic might be an understatement; at the entrance, there was a giant blow-up of Stormi that partygoers had to walk through, and inside the birthday bash, there were carnival rides, personalized and tasty snacks, and Baby Shark. Yup, Baby Shark was at Stormi's birthday party.

Stormi turned 1 year old on Feb. 1, but between the Super Bowl and some bad weather, according to People, it seems that Jenner and Scott finally found the right time to celebrate their baby girl with their loved ones.

But on Sunday night, Jenner was all about celebrating her beau at the Grammys. In 2019, according to Billboard, Scott racked up three nominations: Best Rap Performance for "Sicko Mode," Best Rap Song also for "Sicko Mode," and Best Rap Album for Astroworld.

Scott's Astroworld has been hailed as a strong contender this year. In fact, Rolling Stone has called the album an "impressive feat of synthesis." And as for the 26-year-old rapper's performance style that was on display at the Grammys? Well, those are known to be energetic and eccentric, and Stormi has definitely seen her dad in action before.

Most recently, she watched her dad rock out at the Super Bowl, alongside Adam Levine and Outkast's Big Boi, which Jenner later shared a video of on Instagram with the caption: "PRICELESS."

Though Stormi probably doesn't know right now, but Scott's Grammy-nominated "Sicko Mode" actually references his daughter, and Jenner of course. In it, according to MTV News, Scott raps: "Passes to my daughter, I'ma show her what it took (yeah)/ Baby mama cover Forbes, got these other b*tches shook, yeah."

At just 1 year old, Stormi is still too young to understand and appreciate all of the success both of her parents have already achieved. And TBH, they're both really just getting started. So, who knows, maybe she'll follow in Scott's musical footsteps one day and be up for her own Grammys in the future.