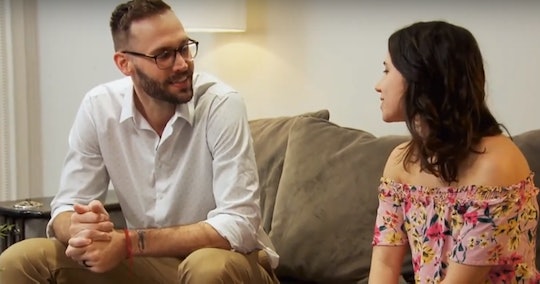 Marriage can be hard work. I have been married for eight years and I’m still finding out things about my husband I wish I didn't know, including less than admirable hygiene habits. Matt and Amber on Married at First Sight are learning the hard way that getting married comes with its own set of challenges. And after their blowout this season, fans are wondering if Matt cheated on Amber on Married at First Sight. It certainly looked like it, with the way he booked it without his wedding ring after their latest big fight. Neither have come out since they filmed the show to reveal anything about it, but it’s possible Matt cheated out of anger and frustration in his new marriage with someone he barely knew at the time.

Whenever Amber and Matt run into trouble in their marriage, Matt’s instinct is to leave rather than stay and either argue or work things out. When you’re in a relationship with someone you see more than anyone else, it can be hard to face them during difficult times. So I get Matt’s need to get some air and catch his breath before diving into what can be a long and heated argument with his new bride.

However, as we all know, no good can come of literally running away from your problems. And regardless of whether or not Matt cheated on Amber during one of his late nights away from home, their communication could use some work.

Amber recently spoke to PopCulture.com about her experience on Married at First Sight and pointed out how communication was the biggest hurdle she and Matt faced this season as a newly married couple. She admitted that part of the issues she ended up having with Matt as her husband was her own inability to put herself first and that she tried to work on that through their first eight weeks of marriage.

"I am non-confrontational to the point where I run away from confrontation," she said. "Matt is the type of person who does not like to express his feelings or communicate his feelings. Therefore, Matt and I constantly struggled to work through any of our issues because neither one of us were comfortable with initiating a confrontation.”

She added that they both had a hard time "having deep talks" to get to the root of their issues but she was grateful to have the show’s experts on hand to help them through everything. While she couldn’t give away in the interview where she and Matt stand today, if he did cheat on her, they may have been able to work through it by Decision Day.

Some Married at First Sight fans on Twitter are convinced that Matt’s behavior means he is actively cheating on Amber. I think they are having issues typical to most couples who can't communicate and he is taking the easy way out by leaving the house any time a confrontation happens or needs to happen. Still, even if Matt didn't cheat, they might be one of the couples who decide not to stay together this season.

In the first eight seasons of the show, eight out of 25 couples decided to split up by the end. For now, the odds are in Matt and Amber’s favor to stay together. However, only two past seasons had all of the couples stay together by Decision Day, so it's possible that Amber and Matt end up calling it quits anyway. Infidelity or not, Matt and Amber’s only hope right now is to get the help they need from the show’s experts.

Married at First Sight airs on Wednesdays at 8 p.m. ET on Lifetime.