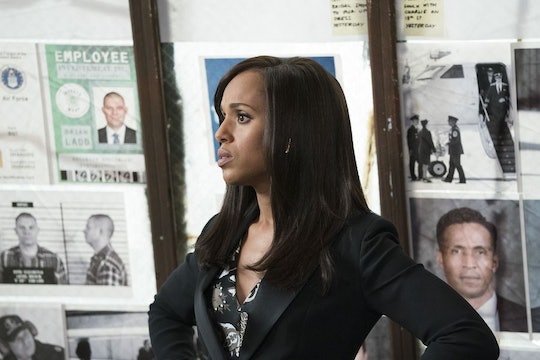 Any devoted Scandal fan probably expected the intensity and downright stressful scenes that led up to the final seconds of the winter finale Thursday night. But after everything that went down, did Rowan really kill Quinn on Scandal? The winter finale was basically a mini-season finale, in that the cliffhanger definitely left viewers wanting more and yelling at their television screens. At least, in my case, that's true.

Some of the Scandal cast and crew spoke to E! News recently at an event in honor of the members of the TV Academy and the actor themselves didn't sound very hopeful about Quinn's ultimate fate. "Things are looking very very very grim to perhaps nonexistent for Quinn," Darby Stanchfield (who plays Abby) said. Meanwhile, Katie Lowes (who plays Quinn) added, "It's very complicated, and there is a lot of doom and gloom, yes." So while neither actress really gave much away in terms of what actually happened to Quinn behind closed doors at Rowan's home, it doesn't sound very promising to be honest.

If this weren't the final season of Scandal, I'd be inclined to insist that Quinn's plot armor is thick enough to keep the character safe until the end of the season, but this is also a show that's not afraid to kill off fan favorites and even kids (R.I.P. Jerry Jr.), so all bets are off.

The entire winter finale episode was one long hour of Olivia trying to figure out how to keep having it all while also keeping control of her father and allowing Quinn to live. (You know, just another day in the life of Command.) But it all came down to a very intense showdown in Rowan's living room, during which Olivia ordered an official hit on him and he pulled a gun on her. Again, this is just par for the course when dealing with Papa Pope drama on Scandal.

The biggest part of the development on Quinn's fate, though, came in those final seconds. When Olivia called Rowan's bluff about shooting her, he walked away and fired his gun once. After that, you could hear Quinn scream and then he fired it a second time. But since it was an alleged death off-camera, you really can't trust it completely.

The good news is that the question as to where Quinn is and who took her was finally answered during Scandal's winter finale, but now fans will have roughly two months to obsess over whether or not Rowan actually killed her or tried to call Olivia's bluff. Or perhaps he shot the gun to try and elicit real feelings and emotion from Olivia. For the better part of the first half of the season, Olivia has been all about being Command and doing things with a no-holds-barred, emotionless attitude.

Maybe Rowan only shot the gun to make Olivia think he killed Quinn to try and get some real emotion out of her. Especially since right before Rowan left the room, Olivia told him, "You think there's a soft chewy center in here... that ray of light you think I am isn't a campfire, Dad, its a blowtorch."

I hate to say that Rowan's entire plan was centered around trying to get his daughter back to the person she was before she became Mellie's Chief of Staff and took on the role of Command, but we also have to remember that Rowan was the first Command on Scandal and he's definitely not an innocent at his core. Being the type of man he is, it's entirely possible that Rowan really killed Quinn. But for the sake of wanting to keep hope alive for the second half of the final season, I say that if there's no body or on-screen death scene, then there's no real confirmation. Quinn may still live to see another day.