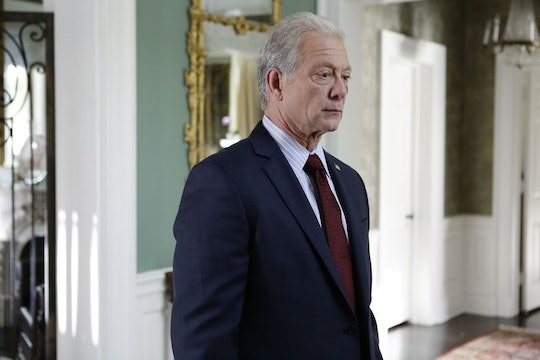 Vargas' Killer May Have Finally Been Revealed

The last time viewers saw Tom on Scandal, he was getting the boot from Cyrus, who had decided to go back to his husband so that he could keep up a better public image since he was going to be running alongside Frankie Vargas. But now that we've seen how Tom first brought up the idea of assassinating Vargas in order to clear the way for Cyrus, we may have finally found our true murderer. So did Tom kill Frankie Vargas on Scandal? If he did, it's because he either wanted to help Cyrus or he wanted to push him into a corner he wouldn't be able to get out of. Either way, Tom being behind Vargas's death on Scandal is totally possible, and at this point, highly probable.

Honestly, I kind of forgot about Tom until he popped back up in the flashback and reminded everyone why they should fear someone more than Cyrus on Scandal. It was almost a given that he showed up to do Cyrus' bidding and at first he did by beating Jennifer Fields (though Cyrus had been under the impression he was just going to give her a stern talking to). But when the topic of killing Vargas came up, Cyrus tried to call off the dog (or, in this case, Tom). Just because Cyrus changed his mind about taking Vargas down, though, that doesn't mean Tom changed his mind along with him. In fact, now more than ever it seems like Tom killed Vargas on Scandal to hurt Cyrus, if anything.

Before, it seemed like killing Vargas was all Cyrus and totally something that the vindictive politician would do, or at least organize. But now, Tom seems to have every reason to want to take down his former lover. After barking like a dog (which may have been one of the creepiest things he's ever done), Tom told Cyrus, "I'm tired of being your b*tch." So if he did really kill Vargas, then maybe it wasn't about getting Cyrus into office, but instead about taking Cyrus down and destroying him for treating him so poorly.

In the end, Tom confessed to the murder outright, however, in a sneaky move, he claimed that he had done it under the orders of Cyrus himself. But that feels like just another ploy to continue in a plot to take down the man who scorned him. Cyrus was initially the most glaringly obvious suspect, but now Tom has suddenly taken his place as the most reasonable culprit in Vargas' murder. Although there is still time for him to go back on his confession, it's entirely possible that he acted alone and has only brought Cyrus' name into it to ruin him and put him behind bars.