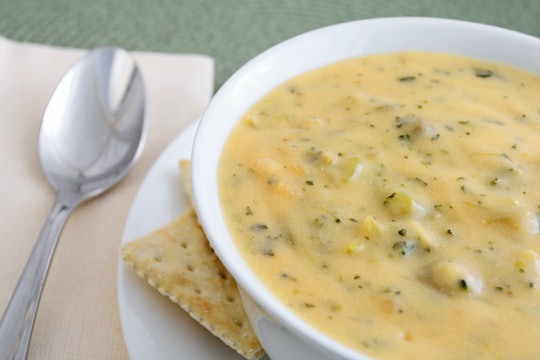 While Disney theme parks are closed across the world for the foreseeable future due to public health concerns, a few family trips have likely been cancelled as a result. So to help get us through this difficult time at home, Disney has revealed the recipe for its cheddar cheese soup as part of its #DisneyMagicMoments initiative that will have you in a vacation mindset in no time. Fairly easy and needing few ingredients, this creamy soup is the perfect lunchtime meal.

Epcot in Walt Disney World is home to the World Showcase, which features areas dedicated to 11 countries, each of which comes with a selection of foods from the counties. And one of the park's most famous dishes is its cheddar cheese soup sold at Le Cellier Steakhouse in Epcot's version of Canada. On Sunday, the Disney Parks Blog released the recipe to the fan favorite dish and while it has been included in Disney recipe books in the past, this is the first time the public can find it online for free.

Alex Dunlap, food and beverage communications coordinator at Disney Parks, wrote in the blog that the dish is a very versatile meal that families can enjoy at any time of day. "It serves as a great appetizer or even a warm dish for a cozy afternoon, and you can pair it with pretzel bread for dipping for a magical meal!" Dunlap wrote.

If you're interested in preparing the soup at home — and how can you not be when you see that delicious photo — you'll need 14 ingredients, many of which you likely already have in your pantry:

To mix the ingredients, you'll need a whisk and an immersion blender. And it looks like the recipe takes less than 30 minutes to prepare and makes 10 servings. You can find the full recipe on the Disney Parks Blog website.

Disney's cheddar cheese soup recipe is just one of many recently released so families can experience a little Disney magic at home. So after you whip up some creamy soup, you might also want to make Disney's grilled cheese sandwiches or its famous Dole Whip for dessert. Bon appétit!