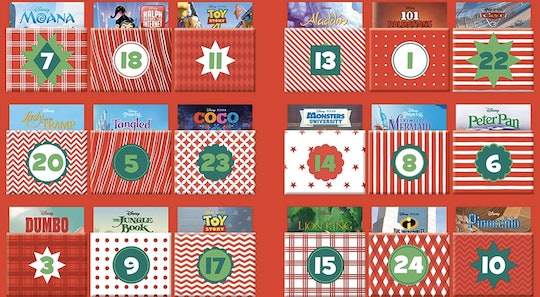 Disney's Advent Calendar For 2019 Is Bound To Sell Out, So Pre-Order It ASAP

As summer comes to a close, many families are thinking about the upcoming holidays. From pumpkin spice everything to holiday decor taking over shopping stores, a lot of exciting stuff is in the works. And in the spirit of the holiday season (which is still four months away, yes) I'd like to direct your attention to one amazing product — Disney's Storybook Collection Advent Calendar. The 2019 version is already the #1 best seller in children's Christmas books on Amazon, so parents should place their orders ASAP before it sells out.

As People reported, the Disney Storybook Collection Advent Calendar was released for pre-order on August 8. Less than a week later, book sales had climbed over 15 million percent, according to Amazon, putting it at the number two best-selling book spot on the retailer's website. Pretty impressive, right? You know, considering there were still four and a half months left until Christmas, it's pretty clear parents get excited for the holidays well in advance. The title will be released at last on November 15, according to Amazon.

After taking a closer look at the advent calendar, it isn't hard to see why it's already incredibly popular. That's because the Disney Storybook Collection Advent Calendar (which is selling for $30) boasts 24 mini-books, one for each day in December leading up to Christmas. Even cooler, each title corresponds to a beloved Disney flick, including Moana, Toy Story, Frozen, The Lion King, Peter Pan, and more.

Indeed, it's pretty much guaranteed that your favorite Disney movie's story is hiding in this calendar somewhere:

Disney aside, it's interesting how much the advent calendar has changed through the years, isn't it? The tradition dates back to the mid-19th century, and during this time, German Protestants would make chalk marks on doors or light candles to count down the days until Christmas, according to Mental Floss. Back in the day, I mostly remember seeing homemade advent calendars made from fabric. Or the ones with little windows that have pieces of chocolate in them, a favorite version for many.

These days, however, advent calendars are a bit more involved. Many of them offer a toy for each day leading to Christmas, like Hatchimals and Legos, to name a few examples. Some include a pair of socks for every day in December, which is genius if you ask me. Who doesn't need more socks? Or what about when, in 2018, grocery store chain Aldi offered a wine advent calendar and an advent calendar filled with mini cheeses? Talk about perfection.

Although my family never participated in this tradition when I was a kid, I've definitely been sucked into the countdown as an adult, mainly because awesome advent calendars like the Disney one exists and because I have a hard time waiting until Dec. 25 to spread Christmas cheer. I may have already pre-ordered mine today, btw.

So yes, . But this mama can't wait to read a new bedtime story every night in December, thanks to this epic Disney advent calendar.

More Like This
101 Advent Calendar Activities, From Books To Read To Cookies To Bake
Spread Some Christmas Cheer In Your Child’s Bedroom
20 Stocking Stuffers For Kids Under $20
20 Of The Best Christmas Movies For Kids

This article was originally published on Aug. 14, 2019