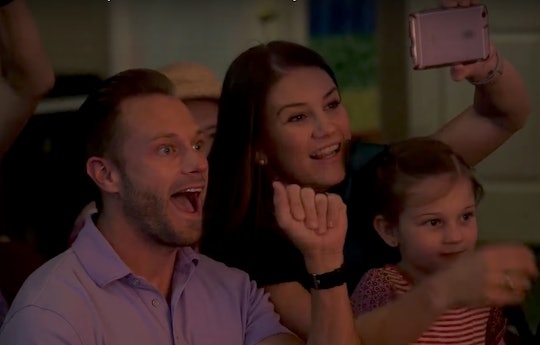 Could The 'OutDaughtered' Crew Grow?

There are probably lots of reasons why audiences are so drawn to reality series all about families with lots of kids — think 19 Kids and Counting and Jon & Kate Plus 8. A major driver behind the success of those hit series, though, has to be viewers' awe and bemusement at the prospect of living in such a crazy, crowded household — and trying to understand how the parents manage it all. That's certainly true for TLC's OutDaughtered, which chronicles the lives of Adam and Danielle Busby and their six young kids. But could it be possible that Adam and Danielle Busby want more kids?

It's important to note, if you aren't already a fan, that, not only are all of the Busbys' kids girls, but five of them are 2-year-old quintuplets. They handle their megabrood so beautifully, though, and they're clearly psyched to have every last daughter.

It's certainly possible, then, that the couple would consider having another. But there's no doubt that the Texas couple already have their hands plenty full with their quints and oldest daughter, 6-year-old Blayke: As OutDaughtered's third season revs up, Olivia, Hazel, Parker, Ava, and Riley are in the throes of the Terrible Twos. In a recent episode, Danielle revealed that Riley is "notorious for spilling her milk on purpose," and then the girls strew paper towels all over the floor.

Also, a recent teaser for the latest season of the show suggests that the time to begin potty training the five sisters is nearing. All that in addition to the fact that Adam and Danielle Busby recently opened a cycling studio with another couple.

So, it seems as though the family has more than enough on its plate.

Still, there's no doubt that Adam and Danielle very much wanted all of the kids they have. Each was conceived via intrauterine insemination (IUI) because of the couple struggle with infertility. Although many parents would say that six is enough, it's not totally crazy to think that two people who wanted kids badly enough to go through such a costly procedure not once but twice might be open to doing it again.

Finances may also be a consideration when it comes to the Busbys' decision. As any parent knows, raising kids is expensive! Starring in a TLC reality series can certainly be lucrative, which is undoubtedly a huge plus for the families who agree to do it. But in an episode last year, Adam talked about the stress of being the "sole provider," because coming a mother of six understandably took his wife away from her own job. Here's how Danielle summed up the situation at the time, according to People:

We budget and we do what we can to make ends meet and make it work. The biggest part of it all is that no matter what we come across, God has always provided, no matter what the situation. I feel like that's kind of his working in this story that we’re living and sharing. He's protecting and guiding us and providing … and that’s how we've done it!

So, it's tough to say whether the Busbys will end up expanding their household even more. Obviously, it's a very private decision, even for reality TV stars. For the time being, though, it seems they're happy (and busy) enough.