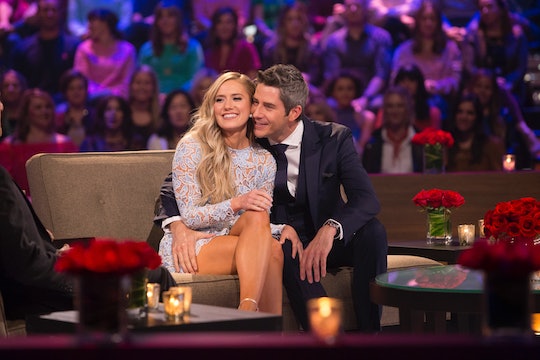 'The Bachelor's Arie & Lauren B. Are Already Talking About Starting A Family Together

After breaking off his engagement with Becca Kufrin, Arie Luyendyk Jr. proposed to his runner up, Lauren Burnham Tuesday night on live television, much to the horror and delight of Bachelor Nation. Fans are understandably shook, but the happy couple has apparently been together for a little over a month now, which means they've had time to plan their future together, for better or worse. They told Chris Harrison on Tuesday that she's planning on moving to Arizona to be with him, which begs some other questions. Like, do Arie and Lauren B. want kids some day, or are they going to just content themselves with his dogs for the time being?

Lauren, 26 years old, seems to have no qualms about jumping right into family life with the controversial bachelor. She told People this week, “I’m moving to Scottsdale. And we’re both very excited about marriage and starting a family.”

A big family, too. Arie added that he wants at least "two to four" children. "If we get lucky, maybe we’d have twins!" the 36-year-old former race car driver added, obviously trying to model his life with Lauren after his parents. (Arie has one sister and two twin brothers.) It's really hard to stay annoyed about his change of heart seeing how happy they are together these days.

Arie told Becca on Tuesday that the time away from her after the show was part of what led him to withdraw into his feelings with Lauren, which seemed cruel at the time, even though it sort of makes sense. He obviously learned his lesson, since the couple revealed in the same People interview that they haven't gone more than a week without seeing each other and, according to Arie, they tell each other they love each other "1,000 times a day." Which is either the sweetest or creepiest thing a Bachelor couple has ever said, I can't decide.

Since he and the Virginia native are both in real estate, they also plan on working together in Arizona and possibly flipping homes together, like the other sappiest couple on TV, Chip and Joanna Gaines. It's a lot to take in for everyone still recovering after the 5-hour finale.

Sometimes the heart wants what the heart wants and Lauren seems to be into Arie enough that she's willing to look past all of the flaws that basically every viewer on Twitter sees in him. That's true love, I guess. Arie even acknowledged how much he messed up in his proposal on Tuesday night, according to Entertainment Weekly, when he took a knee, ring in hand, and said to her:

I’ve made some bad decisions, but the best decision was running back to you. I’m ready to face this life with you and all that comes with it, the good and the bad. I love you so much, and I want to do this in front of everyone because I want to show you that I should’ve done this a long time ago.

"Long time ago" being back in November when he dumped her, but hey, if she can forgive, all of us fans are going to have to as well, maybe.

Although it sounds like the two are eager to settle in and get working on those two to four children and fixer upper Scottsdale homes, it might be some time before they actually tie the knot. On After The Final Rose, Arie mentioned that the two of them planned on taking a vacation far, far away from Twitter and any place where they might be recognized and taunted in the streets. The couple told People that they intend to wed within the year, but at this point, it's hard to really know whether to bet on Arie's plans or not. His mind could change anytime, right?