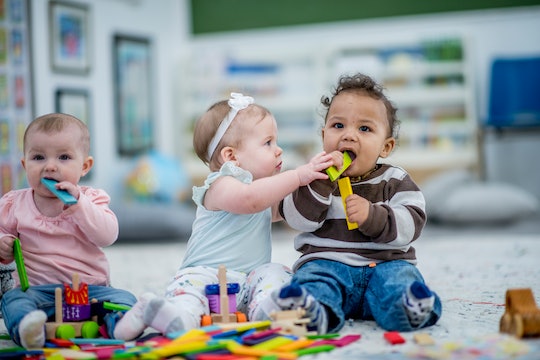 How Important Is It For Babies To Socialize With Each Other? Doctors Weigh In

In their first year of life, babies have a lot of developmental milestones they're supposed to reach, some of which are learned behaviors rather that something that just comes naturally to them. But what about social development? Do babies need to socialize with other babies or do social skills naturally strengthen with time?

More Like This
What You Need To Know About Sunscreen For Your Baby
You Will Not Regret This Perfect Baby Pool From Target
Here's The Deal With Babies Who Sleep With Their Eyes Half Open
I've Missed You So Much! You Still Can't Touch The Baby.

Out of the many (many) milestones your baby will work on in their first year or two of life, socializing with peers isn't one you need to stress over. In an email to Romper, Dyan Hes, M.D., a pediatrician in New York City, says that as long as a baby is getting attention and interaction from their parents, "socialization with other babies before age 2 will probably not impact them significantly." The reason for this, she explains, is because for the first two years, babies engage in "solitary play" by themselves. "Some babies who are more social may enjoy playing with other kids at 18 months," she notes, "but others do not miss it."

That being said, having your baby play with other babies certainly won't hurt. "Babies learn a lot from their peers socially, behavioral, and from a developmental perspective," pediatrician Whitney Casares, M.D., M.P.H., tells Romper via email. Additionally, she says, "A baby also develops an understanding of how her actions and reactions impact others" when they're playing together. "When she takes another child’s toy and that child cries, the social feedback she receives influences how she interacts with other children later on."

Still, both Dr. Casares and Dr. Hes agree that it isn't until age 2 that parents should be making a pointed effort to have their child play with peers. "Between the ages of 2-3 years, babies participate in parallel play, where they often sit next to a friend and play side by side," explains Dr. Hes, "After age 3, children begin to play together." At that point, she says, "they learn to negotiate sharing and taking turns" as well as "patience, waiting in line, and how to follow other instructions."

If you aren't exactly in a rush to set up play dates where you'll be doing more socializing than your baby, you can easily encourage your baby's development at home. In fact, you're probably already doing it. Dr. Casares explains, "Parents can optimize their children’s development by spending undistracted time playing and interacting with them." So, just keep loving on your baby and give yourself one less thing to worry about.

Whitney Casares, M.D., M.P.H., pediatrician, author of The New Baby Blueprint: Caring for You and Your Little One, and founder of www.modernmommydoc.com