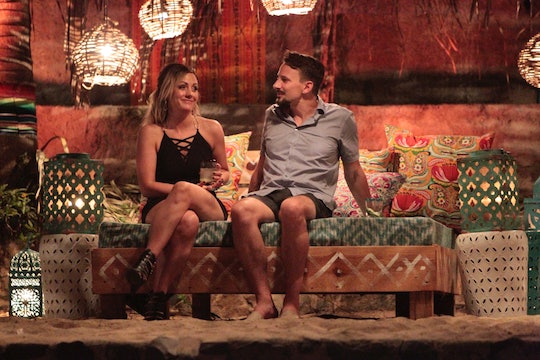 Do Carly & Evan Still Speak After 'Bachelor In Paradise'? They Probably Aren't Meant To Be

Remember when we were promised the most dramatic season of Bachelor in Paradise yet and we basically got it? Seriously, we're three episodes in and already there have been tears, fights, and waking up with poop in your shorts. Season 3 has been everything we could have hoped for so far, especially with the recent drama surrounding a couple that never really was. So, do Carly and Evan still talk after Bachelor in Paradise? When the formerly shafted Bachelor in Paradise contestant and the erectile dysfunction specialist got together, it wasn't the beginning of some awful joke about the two of them walking into a bar, but that's starting to feel what it was like.

When Carly and Evan were canoodling beneath the stars in paradise, a.k.a. Mexico, and she was silently willing him to make a real move on her and kiss her. It took until the last second before parting ways for the night for him to finally get up the nerve to do it. And there were sparks, fireworks, and all sorts of magic involved - for him. For Carly, it was probably the worst kiss she'd experienced, both on and off-camera. So when she finally let him know, albeit gently, that he wasn't the guy for her, we all breathed a collective sign of relief. There's only so much we can take of a non-relationship that is as one-sided as you can possible get.

When Carly sat Evan down and told him the truth about her feelings and not reciprocating his own, it gave me flashbacks to when Kirk broke things off with Carly last season on Bachelor in Paradise. Only, in their case, there was an actual relationship going on and not an insanely strong crush after just one awkward date. And while I would love to pray to the Bachelor gods and ask that Carly and Evan somehow find their ways back to each other, it looks like their relationship after Bachelor in Paradise isn't exactly thriving.

After their not so mutual break-up (can it even be considered a break-up if they weren't officially dating?) on Bachelor in Paradise, Evan and Carly have been sharing some tweets directed toward each other. Namely, about how each of them handled themselves on-screen after the whole ordeal.

Which comment she was referring to is unclear, but maybe it had something to do with when she was telling everyone about their world record kissing date? And if that's the case, then it's no wonder Evan had to fire back on Twitter with comments of his own.

Evan also sent out a tweet that said, "Screw you, Carly," but was quickly deleted. Though not before it was already snagged and put into an article forever. Nice try, buddy. Carly sent out another tweet, presumably directed at her admission to Evan that she didn't have feelings for him. Because what else did Carly do in Tuesday's episode except break someone's heart? OK that was a bit much, but you get it.

Carly and Evan definitely talk now that Bachelor in Paradise is over, because Twitter shows us just how in contact they are with each other, but maybe don't lose hope just yet. Evan is so not going to be able to steal Amanda away from Josh, even though he's intent on stirring up trouble he can't handle, so maybe he and Carly will eventually find their back to each other. Or, maybe it just wasn't meant to be and, as Evan feared, he lost his chance at love in paradise. They had one awkward kiss followed by a kiss with a habanero pepper that literally made them puke. They didn't stand a chance.