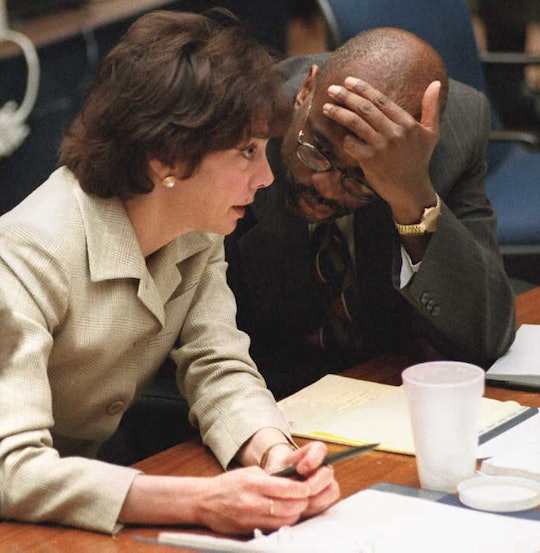 Do Marcia Clark & Christopher Darden Still Talk? Neither Have Spoken To Each Other In A While

Ryan Murphy's newest FX TV show, The People v. O.J. Simpson: American Crime Story has brought back some serious '90's nostalgia. Coined as "the trial of the century" the recounting of the trial of former NFL star O.J. Simpson has brought some old familiar faces back into the limelight. Some of the key players in the trial have come back to audience member's attentions, which has us asking a few questions about the old names that have become new again, such as questions about the prosecution team of Marcia Clark and Christopher Darden. Do Marcia Clark and Christopher Darden still talk? According to both former prosecutors, neither have spoken in a while.

Clark has been very vocal about the trial since the T.V. show's premiere, giving an interview to anyone who will listen — which is a pretty good thing, if you ask me. Clark has been able to provide insight on the trial and clear up some rumors, such as whether or not she and Darden ever dated and what both are up to now.

According to a very extensive profile on Clark in New York Magazine, once the verdict was read, Clark walked out of the courtroom to focus on raising her two sons and never looked back — even leaving Darden behind.

The two, despite being very close at the time, have not "seen each other in ages."

I decided to have a life, to become, pardon the expression, a soccer mom. I knew I wasn't going to do it forever; I'm a career person that's what I do.

On an appearance on Oprah: Where Are They Now, Darden points to a framed picture of the prosecution team.

I haven't talked to Marcia in a long time but for the most part pretty much everyone has gone their own way.

Maybe Clark and Darden will finally speak after all these years as she might have stirred up some negative feelings. In a soon-to-be-aired television interview with Dateline NBC, Clark blames Darden with the decision to have Simpson try on the famous glove.

I did not want [Simpson] to try on the evidence gloves. I never did. That was [Darden's] call. ...I was miserable from that moment that Chris said "No I am doing this" and I never expected anything good to come of it.

Clark and Darden were nearly strangers working for the Los Angeles District Attorney's office when Darden was chosen to assist lead prosecutor Clark, despite Darden having little trial experience.

Now, Darden still practices law while Clark has written numerous books. But maybe the discovery of a knife on Simpson's old property might bring the two back together? I wouldn't count on it.