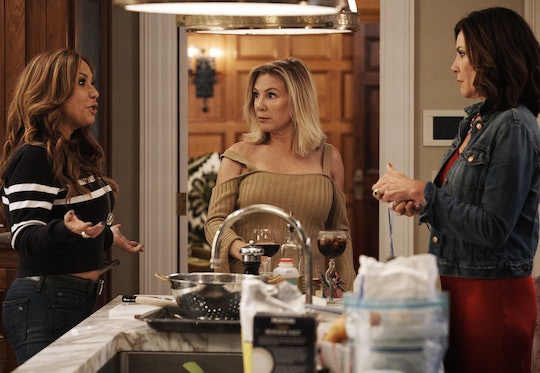 Ramona & Mario On 'RHONY' Have Both Moved On From Their Marriage

It’s never easy to go through marital troubles, but I think Ramona had it just a tad worse these past few seasons on TV while Real Housewives of New York fans watched her go through it with her now ex-husband, Mario. Through a cheating scandal and post-separation period where Ramona had to pick up the pieces of her life, it was tough. Now that is has been some time, fans are probably wondering if Ramona and Mario still get along. The former RHONY couple have had their ups and downs, as fans know all too well, but now that the dust has settled on their divorce and they have both moved on, it looks like they are in a better place as friends.

For those who might have short-term memories or prefer not to relive the pain Ramona felt while filming the past couple of seasons of RHONY, Mario reportedly cheated on Ramona back in 2014. The scandal led to the couple finally ending their 22-year marriage and Ramona told People at the time that she had reached her "breaking point."

Although Ramona said she caught Mario cheating on her, she gave him another chance after a short separation and for a few months, their marriage was on the mend. Then she caught him in another lie and it was the lie that broke the camel’s back. At the time, Ramona told People, "I felt it was very important not to leave the marriage until I tried to do everything to make it work."

Their divorce was finalized in 2016 and since then, the former couple have managed to build a friendship from the ashes of their marriage.

In a clip from tonight's episode of RHONY, Mario makes a surprise return to the show. Sonja gushes about how much she misses him and how much she misses Ramona and Mario together in their inner circle. Ramona says that after going through a mid-life crisis, Mario is suddenly back to the man she married decades ago and that he's "charming, fun, and great to be around." Does that mean she is ready to take him back? It doesn't look like it.

Last year, Ramona appeared on Watch What Happens Live and answered some fan questions about how she felt about her ex-husband after their divorce and the nastiness that led up to it. When rumors about Mario’s girlfriend’s infidelity came up, one caller asked Ramona if she felt vindicated since he had allegedly cheated on her throughout the latter part of their marriage.

"Mario and I are in a very good place," Ramona said. "We're friends. We share a daughter together — and, listen, he was a really great husband and father for some many years, he really was, that's why we were married for over 20 years."

Some fans speculated that Mario and Ramona spent time together at a Chinese New Year party in February. She posted a photo with a man that had an emoji pasted over his face. While it could have been any mystery man and maybe even someone she was seeing at the time, there were a lot of fan comments that insisted it was Mario. Whether they were on a date or just out as friends, if it was Mario, it shows how far they have come, post-divorce.

Despite the last couple of years of their marriage falling into disarray, and on TV no less, Mario and Ramona have remained friends, at least for the sake of the daughter they share. It was probably gut-wrenching to go through what Ramona endured at the end of their marriage, but you probably don't walk away from a 22-year marriage without some semblance of a friendship intact.

Ramona appeared again on a more recent episode of Watch What Happens Live and when a fan called in to ask if she and Mario are friends with benefits, Ramona said that she could never be with Mario again after everything that happened. But she also said that they are "compassionate" with each other for their daughter and that they have remained close in a non-romantic way.

There might not be any hope for a reconciliation, but it looks like Ramona and Mario are still good friends.