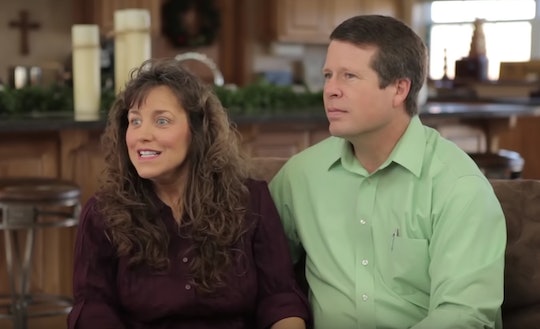 Jim Bob and Michelle Duggar is known for their big family. The stars of TLC's 19 Kids & Counting and Counting On are most famous for their family of 19 and their faith. But the couple is taking on even bigger projects — they're now reportedly flipping houses. Longtime fans of the show are probably wondering why do the Duggars flip houses — especially since they seem to have their hands full. But people will have their minds changed once they see the newest Duggar house on the market because it is seriously stunning.

The Duggar family reportedly put a home up for sale in Springdale, Arkansas this week. But it wasn't the couple's palatial 7,000 square foot home in the same state, which has its own cafeteria, playroom, and plenty of land. This was a new property that they put on the market — a property that they flipped themselves (with the help of a few people, according to People). In addition to writing books, appearing on reality TV, and making speaking appearances all across the world, Jim Bob and Michelle are now flipping houses — at least, that's what their representative confirmed to People and TODAY Home.

Jim Bob and Michelle purchased two bank-owned homes for $360,000, their realtor, April Hamm, told TODAY Home — and they just put one of those homes on the market for a cool $1,800,000. The couple purchased the home in 2014, according to People, and completely transformed it. The pictures of the home are seriously amazing.

This new home boasts a gorgeous patio (perfect for entertaining 19 children), unique architecture (it will go perfectly with any Instagram aesthetic), four separate kitchens (you read that right), four bedrooms and five bathrooms. It's basically Barbie's Dream Home, if Barbie ever dreamt of living in Springdale, Arkansas.

But, this might come as a surprise to some fans, who are more familiar with the Duggar family building their family, rather than building homes. But a representative for the couple told People that they have been flipping homes for a while now, long before they had a TV show. "They've always looked for opportunities where they could improve something," their representative told People. "They just like flipping houses. They like the construction business, the remodel, and seeing something go from bad to good — from being unused to being attractive to others."

Although some people might be confused by this sudden interest, long time fans of the family know that the construction business is something that the Duggar family has been interested in for a while. Joy-Anna Duggar and her husband, Austin Forsyth, also flip homes. They completely renovated their first home and have been known to live in a camper while their projects are being completed, according to OK!.

But they're not only Duggars in construction. Jason Duggar reportedly flipped a home this past summer, according to In Touch Weekly, while his older sister, Jana, designed the home. John-David Duggar has been known to work in construction, and some of the Duggar siblings even have their own real estate licenses. This family was basically made to be a team, and if they can put their strength behind renovating homes, then more power to them.

This seems like a super fun and cool hobby for the family to partake in. And based on their recent work, it seems as if they have so much fun doing it.