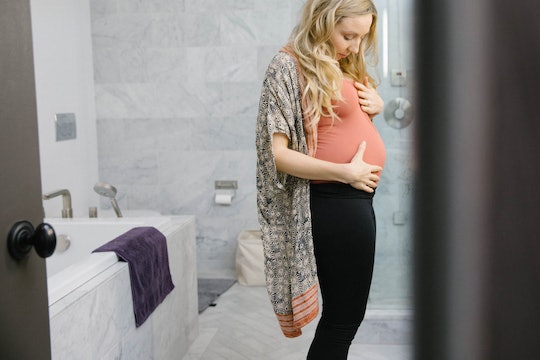 Turns Out, Enemas Are No Longer Part Of Your Birth Plan, & Here's Why

Do a quick search on any mommy-to-be message boards and you’ll find that amongst questions about contractions and morning sickness symptoms are inquiries about poop. No, not baby poop, but instead concerns about whether or not you might have a bowel movement while in labor. By now, most women have found that doctors are completely unfazed by it — considering that they bear witness to many fluids during birth — and so they shrug it off. But there are still questions about the cleanup process if it does happen and even, do they give you an enema before labor? Turns out, this is an old prep method.

“We no longer give enemas before labor,” Dr. Yvonne Bohn, an OB-GYN at Providence Saint John’s Health Center in Santa Monica, California, tells Romper. “I have been practicing for almost 20 years and that practice has been antiquated. I think it was done previously so that women did not have a bowel movement while pushing the baby out. I don't think there is any instance where necessary.”

According to a 2013 study, enemas were given during labor to reduce the occurrence of, well, pooping during labor. Or, as the authors put it, “it was thought an enema in early labour would reduce this soiling and the consequent embarrassment for women.” Healthcare providers also thought it would reduce chance of infection for mom and baby, and reduce the need for that first bowel movement after birth, which is scary for most women (because everything flipping hurts down there). But the study found that the disadvantages, including increased pain for women during labor, outweighed any benefits that might be gained from using enemas before giving birth.

Curious about why you might poop during labor? According to Parents, the “very same muscles that you engage when you're having a bowel movement are the same ones you use when you're pushing.” You can also imagine that your colon and rectum are being a tad squeezed as your baby makes their way through the birth canal, leading you to, perhaps, poop during labor.

If the idea of pooping during labor makes you feel anxious, then keep in mind that not only are healthcare providers used to it, but you’ll likely never even know it happened. According to The Bump, it’s usually not that much and a nurse will just wipe it away before you ever know it happened.

Some experts say that eating fiber-rich foods, like whole grains, fruits, and vegetables, and drinking lots of water in the days leading up to birth can clean out your bowels and help you avoid constipation. But unless you have a moment to use the bathroom before labor, then this probably won’t be much help. Ever had broccoli for lunch and then gone into labor a couple of hours later? Yeah, you’re probably quite literally SOL.

Truth? I still have no idea if number two occurred during the birth of my daughter or not, and I honestly don’t care. All I know is that the moment the labor process started, I was focused on delivering a healthy baby — and you will be too. If you’re still worried about what your doctor or even your partner might think, then I promise you that no one will give it a second thought. Not only have doctors seen it all, but birth also has a way of opening doors within your relationship that you might have never thought possible. For instance, you might find yourself lying in bed saying, “Get me my vagina ice pad!” and never blink an eye.

Not that I would know about that or anything.