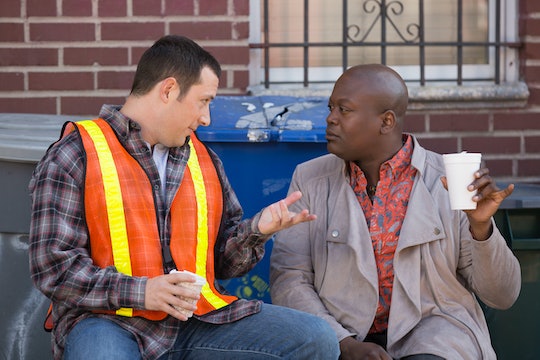 Warning: Season 3 spoilers ahead! Titus is definitely one of the more unique characters, but Season 3 finally saw a more serious and real side of him on a couple of different occasions in regard to both Kimmy and Mikey. And after he poured his heart out to his ex on-stage at the boat party, fans are probably wondering if Titus and Mikey get back together on Unbreakable Kimmy Schmidt. Titus got on-stage and performed his new song "Boobs in California," but right in the middle of it, as Mikey was kissing his new boyfriend, Titus stopped to profess his love for him.

And even though Mikey said that he didn't know what to say back, Titus said that regardless, he would win him back eventually. So will Titus and Mikey get back together, if not now then maybe at least someday in the near future? Season 3 definitely makes it seem possible since Mikey didn't outright turn Titus down when he easily could have.

And really, having Mikey and Titus get back together in Season 4 might be the best time for them since they've each had the time to achieve personal growth by being in relationships with other people. At the very least, Titus is more mature than he's ever been on the show and even though I never really want him to let go of his Titus ways, his character can't be denied.

At the end of it all, as Titus and Jacqueline made it to shore (appropriately ending the season the way he began it), he seemed optimistic about himself apart from his possible rekindled relationship with Mikey, and that alone is a huge step for Titus on Unbreakable Kimmy Schmidt. Their relationship might not be revisited for a while, but it's entirely possible for Titus and Mikey to find their way back to each other eventually, even if it takes a little while to get there.

Season 3 began with Titus performing his own version of Beyoncé's "Lemonade" album to deal with his feelings of being jilted by Mikey, so their breakup was pretty imminent. And once the breakup was final, Season 3 was less about Titus' relationship with Mikey and more about figuring out how to do his own thing, which he did on occasion, even though their dynamic was revisited at different points.

But fans of Titus and Mikey are probably hoping for them to get back together at some point, so that could be where they wind up next season if the series gets picked up for a fourth installment.