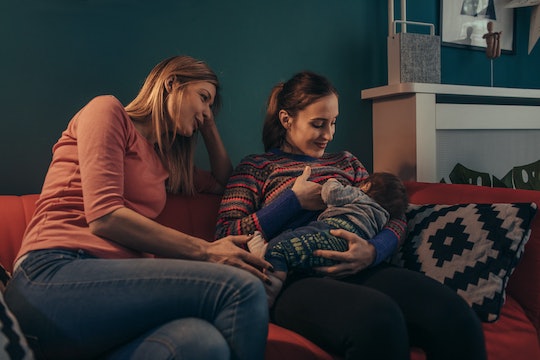 Are Wet Nurses Still A Thing? The Answer Is Actually Fascinating

The history of wet nurses — women who breastfeed other women’s babies — is complicated and controversial. While it became a visible occupation in America in the late 19th century, prior to Emancipation wet nursing was often the work of enslaved people. Even when wet nursing did become a paid profession, it was often poor women forfeiting their own baby’s milk to feed wealthy mothers unable or uninterested in feeding their own. But do wet nurses still exist today?

More Like This
Um, "Rusty Pipe Syndrome" Is A Thing, & Every Breastfeeding Mom Should Know About It
These Pregnancy Symptoms Can Be Easy To Miss When You're Still Nursing
How To Keep Your Toddler Busy While Feeding Yet Another Human
Here's The Deal With Biotin & Breastfeeding, According To Experts

Kristin Gourley, an International Board of Lactation Consultant manager at Lactation Link LLC, tells Romper that yes, wet nurses still exist, and they can be found right here in America.

“Wet nurses still exist but not many people talk about it and when it does happen it's much less of a paid position like it was centuries ago,” Gourley says. Today, wet nursing (or cross nursing, as it’s more commonly called) is a much more casual affair.

It’s “much more a friend breastfeeding her friend's baby while her friend has to work, for example,” Gourley explains.

Some might argue that before present day, wet nurses have always been exploited, be it as enslaved people or low-wage employees. “As a form of exploitation specific to slave mothers, enforced wet-nursing constituted a distinct aspect of enslaved women’s commodification,” wrote Emily West and R. J. Knight in Mothers’ Milk: Slavery, Wet-Nursing, and Black and White Women in the Antebellum South. They explained that “white women used wet-nursing as a tool to manipulate enslaved women’s motherhood for slaveholders’ own ends.”

Following the end of the Civil War, the wet nurse experience changed. It became an aristocratic woman’s choice. But still the choice was fraught. “There’s evidence of wealthy women who were just heartbroken that for whatever reason they weren’t able to breastfeed. And there’s other evidence of women who were just as happy to hand over their children to a wet nurse,” historian Jacqueline H. Wolf told Time magazine in a 2018 interview.

Today wet nursing has evolved once again. “For those who need breastmilk for their baby long-term or in larger amounts, informal milk sharing is much more common,” Gourley tells Romper. “It's not generally an encouraged or discouraged thing in the lactation community. As always, it's important to be sure that the person nursing your baby doesn't have any breastfeeding-communicable diseases such as HIV.”

"I will say that more commonly people share milk by pumping," Leigh Anne O'Connor, an IBCLC, tells Romper. "In my experience the people who nurse other peoples' babies directly are typically friends and family. If you know the person and know they are generally healthy then it is great!"

As O'Connor explains to Romper, human milk is designed for human babies and so it's totally appropriate to share. But the business behind hiring wet nurses is murky. And O'Connor cautions women to do their own research. "I would want to make sure that the person has a baby and has a clean bill of health," she says. "If someone is looking for milk for their baby and they do not have a trusted friend who can be their wet nurse, I recommend they source from an accredited human milk bank."

The good news is, human milk banks are become more and more prevalent. To learn more about these services, O'Connor recommends women visit one of the following sites: