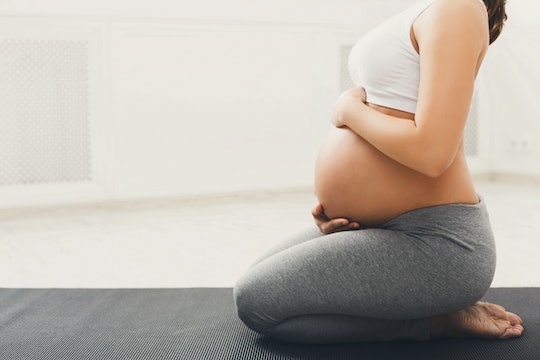 Here's What The Experts Say About Kegels During Pregnancy (Do You *Have* To?)

Gather ‘round, friends, we’re talking about Kegels and I know at least half of you just did one upon reading the word “Kegel.” The name Kegel comes from the late Dr. Arnold Kegel, a gynecologist who invented the exercise (Fun Fact Alert: jacuzzis, leotards, Tupperware, and sandwiches are also named after their inventors). As you're likely well aware, chief among the list of often unsolicited advice mamas-to-be receive is the well-meaning reminder to do Kegels during pregnancy. But is the exercise really as essential as you're led to believe?

“A Kegel is a contraction of your pelvic floor muscles," explains Sara Reardon, pelvic health physical therapist, owner of NOLA Pelvic Health and founder of The Vagina Whisperer.

“These muscles lie like a basket or hammock at the base of your pelvis and attach front to back (pubic bone to tailbone) and side to side (sit bone to sit bone).” If you think of the pelvic floor as an actual floor in the house of your body, it helps to understand how essential it is for supporting all the organs on top of it. The pelvic floor aids in sexual function in both men and women, but in women particularly; increased pressure on the pelvic floor during pregnancy can also lead to incontinence.

“Performing Kegel exercises can help strengthen the pelvic floor muscles and support your growing baby,” Reardon says. Prenatal and postnatal exercise specialist, Anita Mirchandani, says that the best way to do Kegels is to “focus on breath and timing the movement, the goal is to contract your pelvic floor for 5 seconds. Traditional positioning is to lay flat on the back, knees facing up and feet flat on the ground. You can use a bolster to prop your back for support.”

Cultivating a healthy pelvic floor is always a good goal when preparing to give birth, but healthy, in this case, does not necessarily mean strong. Before you start Kegeling the day away, consider this: Certain people may actually want to avoid Kegels.

“There is a societal myth out there that women need strong pelvic floors and that Kegels are the key to achieving such a thing. I want my clients, pregnant or otherwise, to have a well-balanced pelvic floor,” Deena Blumenfeld, childbirth educator and author, says. “Balanced means no leakage, no issues with urinary retention or constipation and no pain during intercourse. A pelvic floor that is too strong doesn’t work as well as one that is well-balanced. When it’s too strong, or too tight, there can be pain during intercourse, retention issues and sometimes leakage because the muscles 'forgot' how to contract and relax properly.”

A relaxed pelvic floor is actually what’s needed during childbirth, and too much strengthening is counterproductive. You can think of it like a rubber band that you keep pulling and pulling with the hope that it will slacken; I’m not a scientist but that’s just… not going to work.

Reardon advises that all women who are pregnant or are preparing for pregnancy see a pelvic health physical therapist who can determine if the pelvic floor would benefit from Kegels and strengthening or if the pelvic floor muscles may benefit instead from lengthening and relaxation. “If your body is about to run a marathon with an all our sprint at the end, you would likely want to train for it,” she says. “Think of pregnancy and birth in this same way, and a pelvic floor PT is like a personal trainer for your pelvic floor.”

Oh also sorry to be a downer, but we may have been doing Kegels wrong this whole time. Most people do them incorrectly by squeezing as if stopping the flow of urine. However, a proper Kegel engages the levator ani muscle and initiates a lift/lower of the pelvic floor. "A squeeze uses entirely different muscle,” Blumenfeld says.

It seems that somewhere down the line, Kegels became a one-size-fits-all approach to anyone with bladder or pelvic discomfort (and beyond pain, anyone with a vagina who was looking to enhance sexual pleasure). It turns out, while Kegels work for some, we’re doing a disservice to our health in believing all women benefit from them.

Looking beyond the Kegel (that’s the title of my memoir, so please don’t steal it), other exercises that aid in pelvic health include planks, downward dogs, and glute bridges, according to Mirchandani.

“Many yoga poses will properly work the pelvic floor, even if they aren’t specific 'pelvic floor exercises.' I would highly recommend that pregnant mothers go to a prenatal yoga class taught by a properly trained and experienced instructor,” Blumenfeld adds.

“A lot of women have issues 'down there,' but feel talking about them is taboo.” Reardon says, and I know the feeling. Yesterday my gynecologist called me while I was in Costco and I found myself barely whispering the word "pap smear" into the phone while trying to one-handed steer my boat-sized cart. “Women think they have to live with pelvic floor problems and that’s simply not the case. Childbirth is one of the biggest physical transformations in a woman’s life and there’s no rehabilitation after. Enter pelvic floor physical therapy!”

The best thing to do if you are pregnant or preparing to be is to see a physical therapist or trained yoga teacher who specializes in pelvic floor health. There are also many great videos that help teach pelvic floor awareness. You don’t have to totally eschew Kegels if you love them and they work well for your body, but know that if you don't like how they feel, you don't ever have to do one again. Except of course, every time someone says Kegel.