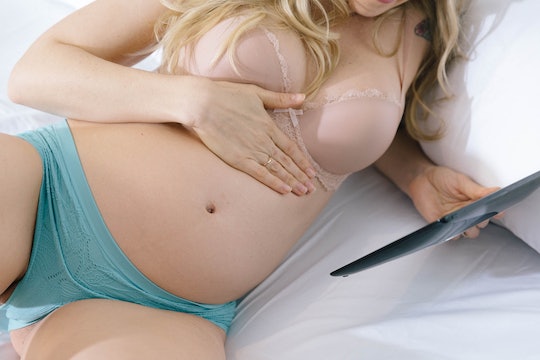 You're Not Imagining Things — Your Boobs Can Change Color During Pregnancy

When you find out you’re pregnant, you tend to fantasize more about life with a new baby and concentrate less on your changing body. But when your hormones start going haywire, and you notice your body morphing as if you were a mutant in the X-Men, you begin to pay closer attention. Your breasts will go through significant changes inside and out, and they may feel a little heavier and fuller, but do your boobs change color during pregnancy? After all, everything else seems to, including your vagina.

Turns out, your breasts can take on a different hue. Dr. Adrienne Zertuche, OB-GYN at Atlanta Women's Healthcare Specialists tells Romper that your areola, the circle of skin surrounding your nipple, may darken during pregnancy. “Some will also notice that the darkened skin extends out away from the nipple toward the rest of the breast," she adds.

“Primarily due to elevations in progesterone and estrogen, women's areolas become darker and nipples become more prominent during pregnancy," says OB-GYN Dr. Kathryn Wright of Facey Medical Group. She tells Romper that the degree of darkening varies between individuals, but it does occur in everyone.

But your breasts aren't the only part of your body affected by those hormones. The progesterone and estrogen levels during pregnancy cause your body to produce more pigment in general, explains Pregnancy Corner, which is why, along with your areola, you might see patches of darkening skin elsewhere on your body, too. Wright explains that the most common pigment change during pregnancy is the linea nigra, a pigment line that runs vertically through the belly button, and fades after pregnancy.

“Some women also have melasma (facial pigmentation) during pregnancy, also known as the mask of pregnancy,” adds Wright, “which can even occur in non-pregnant women, sometimes in those taking hormonal contraceptives.” She says there are other less common pigmentation changes that can occur, too. Melasma, according to Baby Center, can cause darkening of the skin on your cheeks, jawline, or forearms and your skin that is pigmented, like your nipples, genitals, underarms, thighs, or freckles may become darker. The article further noted that women with darker skin, or with a family history of melasma, will be more likely to see melasma during pregnancy than others.

But why, pregnancy gods, why? Pregnancy Corner noted that while there is no known reason as to why this darkening of the areola happens, some experts believe that your areolas darken so that it is easier for your newborn to see and latch on to while breastfeeding. It's believed that this is an evolutionary adaptation, facilitating an easier target for the blurry vision of newborns.

Other than the darkening of the skin around your nipples, Zertuche says that you may notice some other visual changes to your breasts. “It is also common for the blood vessels on the surface of the breast to become more prominent during pregnancy and breastfeeding,” she explains, “and depending on the degree of engorgement and overall weight gain, some women may develop stretch marks on the breasts.” Doesn’t that sound absolutely wonderful?

While your pregnant body may slap you into reality with a ton of weird and uncomfortable changes during pregnancy, it’s comforting to know that, eventually, your boobs will go back to normal. It might take a little bit longer if you’re planning on breastfeeding, but I promise you, as a mom of two who breastfed for four consecutive years, your breasts should go back to their normal color. My areolas are back to their pink hue, and all those frustrations of pregnancy seem like a distant blur. So if you are concerned about the color change in your boobs, don’t worry. Just relax and bask in that beautiful vision of the future, because it really is worth all the trouble.