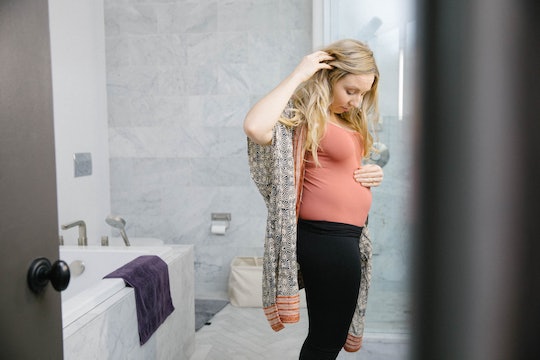 This Is Why Your Boobs Smell Different During Pregnancy, According To Experts

Announcing your pregnancy comes with it a new comfort level of discussing things you once considered private. Your vagina is a constant topic of conversation — pain, funky smells, and no longer being able to see it — and perfect strangers will ask you about what you plan to do, or not do, with your boobs once your baby is born. But even for those who have been through it, certain questions can surprise you, like the other day when my very pregnant friend asked, “Do your boobs smell different during pregnancy?” I didn’t have any answers, but she’s at the point in her pregnancy where you simply agree to all the things, so I nodded and offered a listening ear.

Turns out she’s not alone.

Message board after message board, I spotted other women asking the same thing: "What's up with the smelly boobs?" Experts say there are a couple of things at play here, including the production of pregnancy hormones that make you sweat and a pregnant woman's increased sense of smell.

"Pregnancy is a beautiful state of existence; however, there is a lot going on that folks don’t like to talk about," says Dr. Angela Jones, Astroglide’s resident sexual health advisor. "Forget about the nausea, vomiting, and so forth — what about body odor?"

Jones points out in an email interview with Romper that pregnancy sweats — a combination of raging hormones, increased blood flow, and lugging around a human being — mean that you might need more than just deodorant for your under arm area. Have you ever stood up on a hot day only to realize that you have created a swamp of sweat between your pants and the seat? Yeah, it's kind of like that, but under your boobs.

"And when did sweat ever smell good?" she says.

An increased sense of smell — also known as "pregnancy nose" — can lead women to notice smells that they wouldn't typically, stinky boobs included.

"Everything is heightened in pregnancy, smell included, due to the increase in vascular supply to various organs as seen during the pregnant state," Jones says. "As a result of this enhanced sense of smell, pregnant women are more likely to have an increased sensitivity to the scent of their own body."

Sounds like your partner better keep their smelly feet to themselves. I hear the answer to "Is pregnancy rage real?" is absolutely not debatable.

More Like This
How To Increase Your Sex Drive While Pregnant
Are You Leaking Amniotic Fluid Or Is It Normal Discharge? Experts Explain
What Does Amniotic Fluid Smell Like? A Nurse Explains
New Report Shows 80% Of Pregnancy-Related Deaths Are Preventable