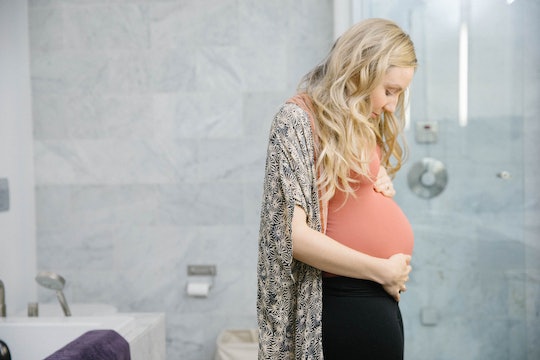 Here's How Your Baby's Kicks Change If They're In Distress, According To Experts

When my daughter was a newborn, she frequently hiccuped, but I wasn't surprised by them because they were a regular occurrence when she was in my belly. Sometimes, they even woke me up at night. Everyone's baby does a different kind of jig when they're in the womb — some seem to be constantly somersaulting, while others are pretty solid snoozers. Most of the time, the changes in movement are normal, but it doesn't stop a soon-to-be mom from wondering when she should be concerned. For instance, does a baby kick differently when they're in distress? Experts say not exactly.

"Unfortunately no it does not," Dr. Jaime Knopman, co-founder of TrulyMD, and director at New York's Colorado Center for Reproductive Medicine, tells Romper in an email interview. "In fact the opposite may occur — a baby in distress will often have a decrease in fetal movement. A change in fetal movement is often a sign that something is not right and you should contact your OB-GYN immediately."

According to What to Expect, babies who are doing well in the womb have a stable heartbeat and respond to various stimuli by moving. But a baby who is in distress will have a decreased heart rate and change their pattern of movement.

But it can be hard to determine what is "normal" for your baby, which is why following your baby’s kick counts can come in handy, says Dr. Sherry Ross, OB-GYN and women’s health expert at Providence Saint John’s Health Center in Santa Monica, California. "Kick counts are a standard way of monitoring healthy fetal movement as long as your baby moves 10 movements in a two-hour period, at least twice a day," she tells Romper in an email interview.

Dr. Lakeisha Richardson, a Mississippi-based board-certified OB-GYN, tells Romper that if you sense a change in fetal movement, then it's important to go to a quiet location and lie on your left side. You should then monitor fetal kick counts by placing your hand on your abdomen and focusing on the baby's movement. "If you have 10 kicks in less than two hours, you can resume previous activities."

But don't get too hung up on doing kick counts, says Ross, who is also the author of She-ology: The Definitive Guide to Women's Intimate Health. Period. It is only necessary if you are noticing the baby’s daily movement is less often in general. She explains that it's common for a baby to sleep most of the day while growing inside the uterus. On the other hand, after meals, snacks, and at night, the baby movement will be more noticeable.

“A baby moving infrequently can be a cause for concern, but doctors are unsure of the significance of a baby who seems to move too much," Dr. Allison Hill, a board-certified OB-GYN and author of Your Pregnancy, Your Way, tells Romper in an email interview. "Generally, doctors reassure patients that frequent strong movements and hiccups are not a reason to worry."

Hill does point out, however, that a single episode of vigorous activity has been associated with stillbirth, so, as other experts noted, any notable change should be reported to your provider.

Ross says you also shouldn't be surprised if around 36 weeks the perception and forcefulness of movement changes and becomes less noticeable. "As the baby grows (a half pound a week in the last trimester), the baby has less space to stretch out," she says.

Like anything in pregnancy, if you notice a change that concerns you, then it's time to discuss it with your doctor. Because there are no silly questions when you are growing a tiny human inside of you.