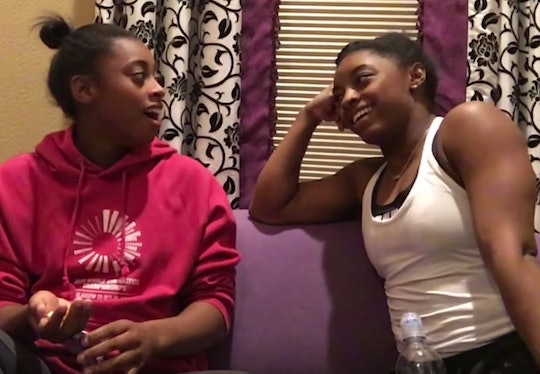 Does Adria Biles Train At The Same Gym As Simone? The Olympian's Sister Is Also A Gymnast

In case you've been living under a rock for the past week, let me catch you up: Gymnast Simone Biles killed it — killed it — in every single Olympic event she competed in, and she'll head home to Texas from the Games in Rio de Janeiro with five medals, four of them gold. She earned those accolades through insane talent, yes, but also hard work, which means she'll likely start her intense training regimen again soon after her triumphant return. And sometimes that level of greatness (and dedication!) runs in the family, as Biles' younger sister is an accomplished gymnast too. But how good is she, really, and does Adria Biles train at the same gym as Simone?

Nineteen-year-old Biles, who is widely regarded as the most talented gymnast ever, has said that she spends about 32 hours a week training — and that she sometimes even fine tunes her routines at the gym, solo, on her one day off. And it's definitely more than likely that she has her own set of keys to the place: According to The Undefeated, Biles' parents actually opened their own gym, the World Champions Centre outside of Houston, as a home gym for Simone, in 2014.

It was a major investment for the family (the 52,000 square foot structure cost more than $5 million to build and Biles pays her own gym fees with money from her many endorsements), but one that was ostensibly well worth it. Adria Biles, 17, who currently competes at the junior elite level, almost certainly also has unlimited access to the aptly named facility.

And whatever Adria is doing — where she trains, how she trains, who her sister is — is definitely paying off. In order to be considered for elite competition, junior elites much reach the highest level, which is a 10; Adria Biles' most recent competition, in April, was a level 9. And it's clear that she's seriously talented, even if she's not quite on Simone's level:

The World Champions Centre opened its doors to the public in May, and part of its mission is to "make each individual feel like a real champion," from those practicing taekwondo to preschool gymnastics to competitive gymnastics, according to its website.

It may be the gym, it may just be their family's loving influence (the two are intertwined, anyhow), but Adria and Simone are clearly always supportive of each other, no matter what. And that's what truly makes them champions.