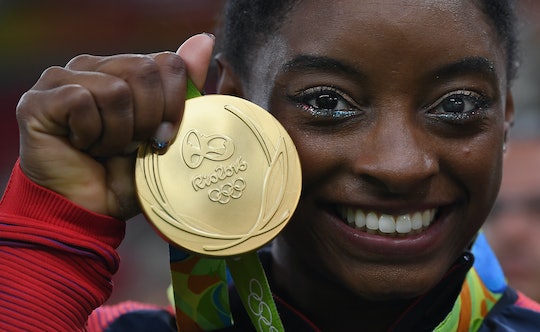 How Many Days A Week Does Simone Biles Train? She Puts In The Time

Even before she lead her Olympic team in winning the team gold in Rio Tuesday, Simone Biles was already garnering major accolades, as gymnastics experts have labeled her the sport's best athlete ever. The 19-year-old member of the United States' "Final Five" is living up to that testament to her talent and her strength as she pursues another gold in the all-around final Thursday, but dedication and seriously hard work have contributed to her still-blooming success as well. So, exactly how many days a week does Simone Biles train? Because it's clear that all that practice is paying off for her, and she's making America so, so proud.

During livestream coverage of the all-around final (which Biles was heavily favored to win and, in the end, eventually did), the announcers discussed the fact that Biles regularly visits the gym alone on Sundays to fine-tune her skills and her routines. That's not exactly shocking, considering that Biles is of the highest caliber of athletes out there, but it is notable because Sunday is actually her only official day off from rigorous training. The elite gymnast trains 32 hours a week, (six days a week), as she told Ellen DeGeneres in March — oh yeah, and she spends her time at the beach pulling her body up at rope using just her arms. It's actually "very easy," she said.

There's certainly a confluence of factors at play that have lead Biles to earn first place at all 12 of the all-around competitions she's competed in since 2013. And her prowess is evidenced by the existence of "The Biles." The move is a double layout with a half twist out, according to The Huffington Post, and it was officially named after her in 2013, when the Spring, Texas, native completed it in a world competition for the first time in history. Now matter how much natural-born talent a person may possess, they don't reach that level of Olympic royalty without putting in some serious time at the gym.

Biles, of course, isn't the only incredibly hardworking Final Five gymnast in the Game. Aly Raisman puts in 35 hours a week at the gym, and Madison Kocian, another team members, trains both before and after lunch. Sixteen-year-old Laurie Hernandez has said that her training last about six hours a day, and Gabby Douglas hones her considerably skills for four hours in the morning and two in the afternoon.

They all have impressive physical and mental toughness, and that's why they're bringing home gold for the United States this year. Biles, hailed as the best among the best, has shown that all her time training and perfecting what seems to be already perfect certainly augmented her extreme natural talent.