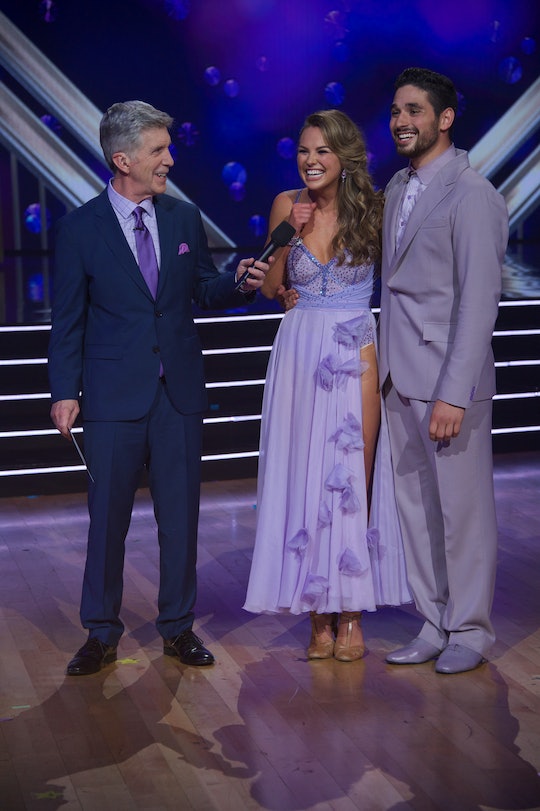 The Showmance Rumors On 'DWTS' Have Already Started

Last season on Dancing With the Stars, Alan Bersten left the show without a MirrorBall trophy, but with a new girlfriend on his arm. A lot can change between seasons, though, because Alan and his then-partner Alexes Ren called it quits not long after Season 27 ended. Now, he has chemistry with his newest partner, Hannah Brown. Because he now has a history of falling for partners, you have to wonder if Alan Bersten has a girlfriend now or if the DWTS pro is single and ready to fall for someone on the show again.

Ahead of the season, Alan told Entertainment Tonight Canada that he is single now, but joked that he doesn't want anyone sliding into his DMs because his mom reads them. His partner is also newly single after suffering heartbreak of her own on The Bachelorette this season. Hannah narrowed her contestants down to the final two and got engaged, only to have her world rocked when news broke of her intended’s potential real reasons for going on the show in the first place, which didn't include falling in love.

Hannah left The Bachelorette single and she’s still single now, so it could mean that all of the chemistry fans saw between Alan and Hannah on night one might translate to a new on-screen romance for them both.

It didn't take long for the fan rumor mill to start churning and for fans’ hopes of Hannah and Alan finding love with each other to start up during the Season 28 premiere. They were the first dance of the night and by the time they sashayed to the judges’ table, fans and even DWTS host Tom Bergeron hinted that there could be something between them.

Unfortunately, both Hannah and Alan denied any showmance rumors when they spoke to Entertainment Tonight following the season premiere. Alan said he would rather have Hannah "fall in love with dancing" instead of him and she seemed equally as uninterested in starting up another romance in front of cameras.

"I think everybody has had this journey with me, and it's been focused on finding a person that I'm going to spend my life with, but right now, that's not what I'm focused on," she said.

Still, the fact that Hannah and Alan are single on DWTS this season opens the door for both of them to explore the possibility of finding romance with each other. Or, they might just keep the chemistry on the dance floor, which clearly equates to high scores for them as a team. Either way, they stand a real shot at winning the MirrorBall trophy and it probably helps that they have no other distractions outside of the competition.

Fellow Bachelor Nation star Demi Burnett recently talked about the prospect of Hannah and Alan getting together when she appeared on Nick Viall’s podcast, Viall Files. As much as she supports Hannah's newest journey on DWTS this season, she doesn't think a showmance is a good idea.

"I don’t want anyone putting all that pressure on her," Demi said, of fans wanting Hannah to fall for Alan. "I feel like everyone is like, 'Ooh, they’re gonna fall for each other?' Who knows!"

Even if Alan doesn't make a repeat of his season with Ren, his single status could bode well for continued fan reactions in regards to his scores with Hannah. If fans love watching them together with the small hope of seeing them fall for each other live on TV, Hannah and Alan could be this season’s fan favorites.