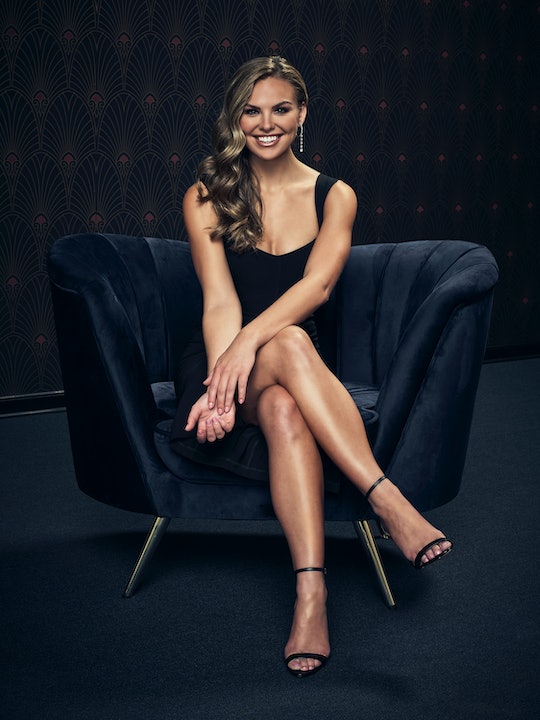 Hannah & Alan Could Be The 'DWTS' Showmance Of The Season

Dancing With the Stars isn't The Bachelor and I doubt Hannah Brown wants to relive her season of The Bachelorette, but she was given Alan Bersten as her partner. And after he was embroiled in a showmance last season, it's hard for fans not to see the chemistry he has with Hannah. They got their first dance out of the way and there were sparks. Now, fans ship Hannah and Alan on Dancing With the Stars and, like The Bachelor, it could be the *most* dramatic season of DWTS yet.

Last season, Alan was paired with Alexis Ren and in between rehearsals and performances, they managed to develop feelings for each other. It wasn't long before they became a thing and were in a showmance that fans couldn't help following until they were cut at fourth place toward the end of the season. On a show where dancing is the most important thing, their romance became an easy distraction for viewers.

Season 27 aired a year ago and Alan and Ren are no longer together. So if fans are now shipping Alan with his latest partner, who happens to be a former Bachelorette lead, it's not the wildest suggestion for the pro dancer.

Just a month after DWTS Season 27 finished, People reported that Alan and Ren had called it quits. The couple had careers which took them to opposite sides of the world and it was hard to keep up with their relationship following DWTS, according to the news outlet. They remained close after their breakup, but Alan and his former partner are no more. Does this mean he's open to a new showmance, this time with Hannah? Fans certainly hope so.

For what it's worth, Alan is single now, and, in the opening scene at the start of Monday's DWTS premiere, Hannah confirmed she's also single. And ahead of the premiere, Alan spoke highly of Hannah with Entertainment Tonight Canada before he could reveal who he was partnered with.

"My partner is extremely hard working," Alan gushed. "I’m very impressed. She’s the hardest worker I’ve ever seen — maybe more than any other celebrity." He added that "she just puts in the work." Please excuse me while I try to come up with Hannah and Alan's perfect couple name.

I'm not sure how many people watch DWTS in the hopes of seeing people couple up romantically, but it always offers something extra when it happens. Most pros and their partners manage to have a certain amount of chemistry to make their dance numbers that much spicier, but you have to expect that some of the sparks you see fly between the pro and his or her celebrity are sometimes real.

In Alan and Hannah's case, fans are hardcore rallying for a showmance to make their partnership feel like it was a match that was meant to be.

If Hannah and Alan become a thing this season, it wouldn't be the worst thing for either of them. They're both single and Hannah could use a romantic distraction after the highs and lows of her season of The Bachelorette. She got engaged at the end of her season, only to find out her chosen suitor wasn't necessarily on the show for the right reasons. To come to that conclusion is like the kiss of death on a show in The Bachelor franchise.

Hannah didn't have an easy Bachelorette season. If she's ready to move on romantically, then fans are ready for her to make it happen with Alan. If not, then at the very least, Hannah and Alan's chemistry is still going to work in their favor.