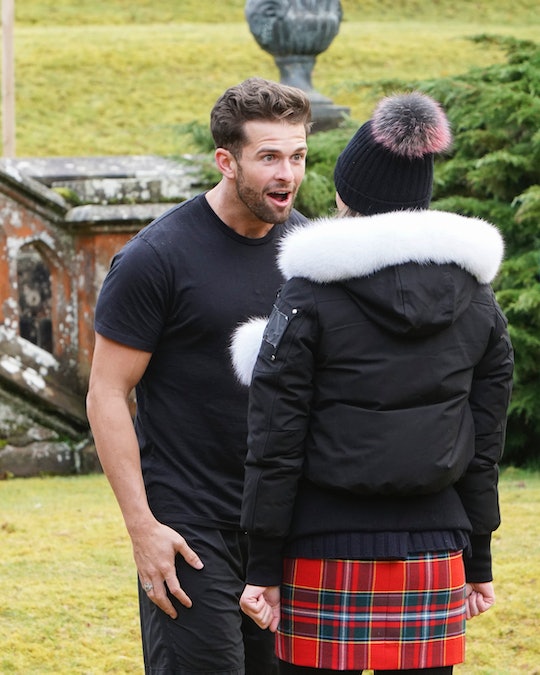 A couple of weeks ago, fans were swooning over Jed on The Bachelorette and rooting for him. But after the news broke that he had a girlfriend while he was on on the show, fans lost trust in him. And after his serenade on Monday's episode, the Jed tweets after The Bachelorette prove that fans are still not buying what he's selling.

Last week, People reported that Jed was in an established relationship with fellow musician Haley Stevens when he was cast on Hannah's season of The Bachelorette. Stevens told the news outlet that she and Jed were together up until the night before he left for the show and assured her that The Bachelorette was "just an obstacle" for them to overcome as a couple. Stevens also alleged that Jed went on the show solely to benefit his music career. And after he broke out in not one but two different songs on Monday's episode, Bachelorette fans don't need any more convincing that that may be the case.

To Jed's credit, he did tell Hannah in a previous episode that at first, he saw the show as a platform for his music. He then said that he caught major feelings for her in the process and she accepted that. But as soon as the news about Jed's girlfriend was released, Bachelorette fans wrote him off.

One of the lines in Jed's song to Hannah toward the end of the episode tonight was something like "I would never tell a lie," and fans on Twitter took that and ran with it. Considering the allegations that he was seeing someone prior to going on The Bachelorette and potentially using the show for his career, the song couldn't be more of a contradiction to who Jed is.

A week ago, fans might have loved the way Jed approached Hannah during and after the dates of Monday's episode. He seemed to be intent on making his strong feelings clear and even told her that he is falling in love with her. But after everything that has come out, fans on Twitter are over Jed and basically don't want to hear what he has to say. Assuming Jed's alleged girlfriend outside of The Bachelorette really was with him prior to the season, I think fans have every right to feel cheated.

Maybe Jed was telling the truth when he told Hannah that he went on the show to use it as a platform for his music, but fell for her in the process. That still doesn't take away from the fact that, if he had a girlfriend he intended to keep outside of the show, his actions are pretty icky, of you ask me. Someone who would have gone on The Bachelorette for the right reasons could have gone on the show in Jed's place, but instead, he might be on the show with ill intentions. And fans aren't having it.

Until now, Luke P. has been the villain of the season. It's unclear if the trend will shift and viewers will get to see Jed as the new villain to finish out the season, but right now, Hannah seems like she is head over heels in love with him. Of course this is because she is under the impression that he didn't go on the show with a girlfriend back home. But now, every time he makes a new promise to Hannah or sings an original song to her, his words have a new meaning for fans who just don't trust him.

In the interest of Hannah's feelings, the ideal situation would be for the allegations about Jed's girlfriend to be proven false. Right now, however, Bachelorette fans see him in a new light and I don't see that changing anytime soon.