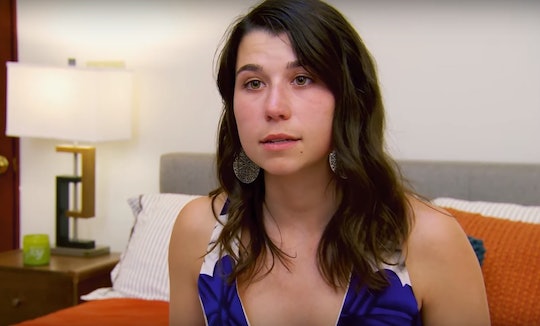 When Amber and Matt first met at their wedding on Married at First Sight Season 9, it seemed like a perfect match. They were attracted to each other right off the bat and they quickly got past the awkward stage of not knowing each other. Then they had what can only be described as the perfect honeymoon. But once they went back to reality and the idea of living in domestic bliss settled in, things got rough. They were one of the couples who decided to divorce this season, but does Amber have a boyfriend after Married at First Sight?

On decision day, she made the move to ask for a divorce. And although it might have taken some time for her to move past the experience, she was ready to move on following her final meeting with the experts on the Married at First Sight season finale.

During their meeting, Amber said that Matt should have spoken up sooner if he wanted a divorce instead of potentially cheating on her. She made it clear that his actions hurt her throughout their short marriage and it could have saved her some of the heartache which resulted from poor communication skills and an absentee husband.

But Amber also said she knows she deserves better than the marriage she had with Matt, which proves she can move on when she is ready. "I’m proud of myself for finally confronting Matt," she said in the episode. "It wasn't easy, I didn't really want to do it, but it was needed. I deserve true love and I deserve a good relationship. I’m gonna get through this."

Since the finale aired, Amber hasn't revealed if she has officially moved on with anyone else specifically, so it's unclear if she’s dating anyone. But because the marriage seemed to be over well before decision day, it might have given Amber time to work through her emotions and feelings for Matt even before they got divorced.

Amber voiced her concerns with Matt throughout the season, but they were never really able to work out their issues. It might have had something to do with the fact that they were still strangers and married, which is something she brought up to him when she asked him to spend more time getting to know her than out with friends every night. Still, she told Reality TV World in an interview, she wouldn’t have done anything differently.

"Looking back on things now,and being honest about who I am as a human, I probably would have handled things similarly," she admitted. "Since I was married to him, I was committed to making this relationship work because I trusted that the experts put him in front of me for a reason." But, she added, if she had met Matt on a dating app, they wouldn't have made it past the first date.

Amber has a lot of love to give and she’s open to finding love. She was one of the more romantic cast members this season and she was ready to try and make things work with Matt for a long time before she finally hit her wall. The show’s format makes it hard for some new couples to really gain their footing, so it's totally understandable why Amber had finally had enough of her own marriage with Matt.

While it's not clear if Amber is dating anyone after Married at First Sight, she probably won't have a hard time finding someone else when she is ready. For now, however, she might just be enjoying the single life and recuperating from her eight-week marriage experiment.