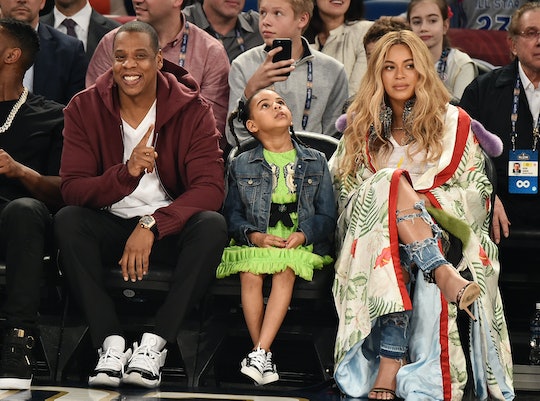 Does Beyoncé Have A Nanny?

Since Beyoncé has taken a well-deserved radio silence from all of her social media and online presence, the world can only speculate that the twins have arrived, although, according to numerous reports since mid-June, yes: The twins are here. Not much has been confirmed about their birth, from their gender, to their names, or even if they arrived early. And even though husband JAY-Z is out promoting his new album 4:44, Beyoncé clearly has her hands full going from being a mother of one to a mother of three. Does Beyoncé have a nanny to help her with the twins?

According to website Hollywood Life, Beyoncé and JAY-Z factored in nanny plans as they designed their twins' nursery, as the nursery allegedly has an adjoining suite for both a nurse and a nanny. Beyoncé has also reportedly used nannies in the past for her eldest daughter, Blue Ivy. According to J. Randy Taraborrelli's unauthorized 2015 biography of the singer, Becoming Beyoncé, nannies for Blue Ivy had to sign a lengthy agreement. Speaking to Entertainment Tonight, Taraborrelli, "If you're a nanny coming into her household you have to adhere to this," also calling Queen Bey a "control freak." Representatives for Beyoncé did not immediately return Romper's request for comment.

It's not uncommon for parents of multiples to hire a nanny. It can be an emotionally fraught issue for any mom to hire a nanny, but there's no shame in doing so. And given that Beyoncé is now the mom of three while still being an international multi-millionaire superstar goddess, I certainly wouldn't blame her. She certainly wouldn't be the first famous mom of multiples to hire a nanny for her twins, either. But then again, there are plenty of celebs who don't use nannies, either.

Take for example George and Amal Clooney: No nanny for their twins. As the couple prepared for their twins' arrival, they decided not to hire a live-in or full-time nanny. Instead, they wanted to invest in a night nurse to help regulate their sleep schedule, but that's it. So perhaps Queen Bey's entourage for her growing family might not include a nanny, but given how completely tight-lipped her entire camp has been regarding anything about the twins, there's just no way for fans to know for sure.

Regardless of whether Beyoncé has a nanny, she's definitely a busy mom. She already has one adorable Instagram-filter loving daughter, two new twin babies who were reportedly born premature, a husband who just dropped his first solo album in four years, and Beyoncé herself is reportedly working on an album to drop before her Coachella headline in 2018. Yes, Queen Bey can slay — but she's got a full plate right now, and I'm sure she'd appreciate any and all help she could get right now.

I've never nannied professionally or anything, but I'm just saying, Beyoncé, if you need some extra help or anything I'll happily come over and watch the kiddos.