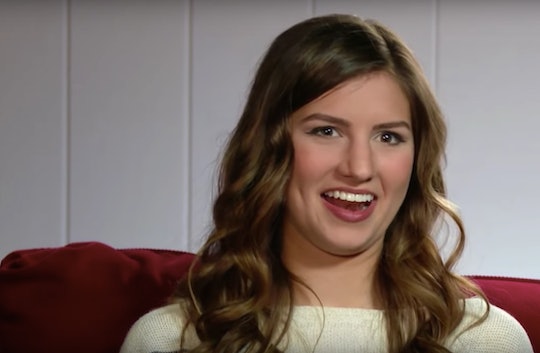 Carlin Bates May Not Have A 9-5 Job, But The Expectant Mom Keeps Plenty Busy

If you're one of the many enamored with the Duggar family, you may just find your next obsession in the Bates family. The latest expectant mama in the Bates bunch is Carlin. If you're scrambling to get to know her, you may be wondering, does Carlin Bates work outside of appearing on her family's TV show? While the Bates family isn't known for its religious restrictions quite like the Duggars are, its members mirror their large family friends in the scant details available about their individual personal lives available online. There's plenty to read about Bates' wedding and expected addition to the family, but her work history is a bit of a mystery. But here's what we do know.

Carlin Bates, who recently became Carlin Stewart, comes from a rather large family — 19 children in total and parents Gil and Kelly Jo Bates, according to the Bringing Up Bates IMDb page — and the members are as varied as they are plentiful. Many of them have gone on to start families of their own, growing the brood exponentially. After about two years of dating, 21-year-old Carlin married Evan Stewart in a beautiful outdoor wedding at the end of May.

It wasn't long after the wedding that the happy couple announced that they were going to be parents. Last week, Carlin told Romper about all of the excitement surrounding her pregnancy. "We are beyond thrilled to be expecting our first child," she said. Spending every day with your best friend and building a life together has already exceeded our happiest dreams. We are so happy at the thought of parenting together. Three at the table sounds perfect! God is so good."

From what I can gather, Carlin will be free from worries over maternity leave. While she doesn't currently have a job advertised on the show or online, she did a lot of volunteer work at her family's local church before the premiere of Bringing Up Bates. She is a talented musician, can yodel and play the piano and violin, and led the children's ministry at her church, according to Famous Birthdays.

Carlin's love for teaching children didn't stop at church. A January episode of Bringing Up Bates showed Carlin helping her mom tutor the younger children, as shown in the UPtv preview for the episode. In the same episode, she talks about finishing up college online — so she may be preparing for a career in the future.

Stewart, on the other hand, may have some parental leave concerns once the new baby arrives. As of March, the 22-year-old was going to school to be an electrician in the Tennessee town where he and Carlin live, according to the Bates Family Blog. If he continued with his schooling, odds are he is working in his field and may need to request some time off to be at home with his growing family.

But even if Stewart isn't able to take paternity leave, Carlin will have plenty of support in her parenting journey. She told People that she is enjoying pregnancy at the same time as of her sisters: Whitney and Erin Bates, “I’ve learned something from each one of them," she said. "They’ve already answered so many questions that I’ve had. I know we have bonded even more, now that we have motherhood in common. My sisters are my best friends.”

Whether Carlin is employed in the traditional sense or not, being a mom is a full-time job in itself. It won't be long until she's putting in the long, hard hours of motherhood and reaping the many rewards.