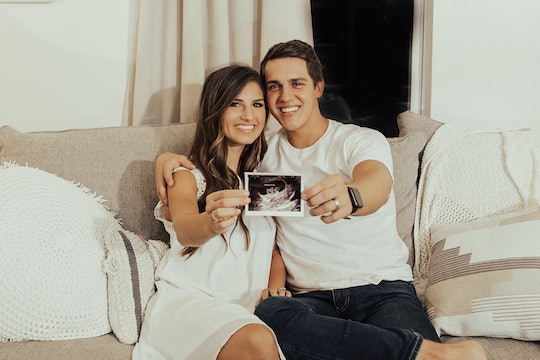 Nearly a week after revealing the exciting news that her first bundle of joy is on the way, Bringing Up Bates star Carlin (Bates) Stewart shared a new bump photo on Instagram to commemorate an exciting time in her pregnancy. On Monday evening, Carlin, dressed in a fashionable athleisure outfit and baseball cap, cradled her bump and revealed she's officially 16 weeks along in her pregnancy as well as a few other details within the comments section of the post.

"Feeling so thankful to be carrying such a precious gift," Carlin captioned the bump photo on Instagram. "Thank you instagram family for being so encouraging and supportive with the many comments, prayers, and the excitement you have shared!" The expectant mama added the hashtag #16weeks and also revealed that her growing bundle of joy is officially the size of an avocado. At 16 weeks, according to What To Expect, Carlin's baby-to-be may be also able to hear her singing or talking as the "tiny bones in [the] fetus' ears are in place."

In the comments of the photo, Carlin, who tied the knot with her husband Evan Stewart in May, also revealed whether she's going to find out the sex of her first child. "Are you finding out the gender or waiting!? If so, I bet you'll have the best gender reveal!!" one fan asked, to which Carlin responded: "We are gonna have a gender reveal party and find out with the whole family. I can't wait!"

Considering that Carlin is 16 weeks along in her pregnancy, she may be learning whether she and Evan are having a boy or a girl pretty soon. Usually, between 16 and 20 weeks, a "midpregnancy ultrasound" can likely identify the sex, according to Baby Center, so Carlin's reveal party could be happening pretty soon.

While she only recently announced her pregnancy, Carlin seems absolutely over the moon. On Sept. 4, Carlin and Evan, who both star on Bringing Up Bates on UPtv, shared with Romper that they "are beyond thrilled to be expecting our first child."

"Spending every day with your best friend and building a life together has already exceeded our happiest dreams. We are so happy at the thought of parenting together," Carlin and Evan said in a statement at the time. "Three at the table sounds perfect! God is so good."

Carlin, who's due sometime in February 2020, also shared that she's been dealing with nausea during her pregnancy and told People that she "received some fearful news at [her] first appointment" that showed she has "the same two clotting disorders" her sister, Erin, had during her pregnancies. Carlin told People that Evan has "had to learn to give [her] two shots daily."

"I haven’t found any successful tips yet to deal with the nausea, but it has made me very appreciative of Evan, who stays by my side, and offers so much encouragement!" Carlin told Romper. "I also have a new compassion for other pregnant moms who have bravely endured nausea and discomfort!"

On Monday, within the comments of her new bump photo, Carlin replied to a fan asking about how she's coping with her daily shots and shared that while it's not the easiest, she's powering through. "Some days are worse than others, but it's totally worth it," Carlin wrote to a fan. "I'm pretty sure Evan is going to be a pro at giving shots by the end of this pregnancy... all in all, I'm getting used to the black and blue belly."

Hopefully Carlin will continue to share some more bump-dates with her fans and any discomfort she's experiencing subsides soon.