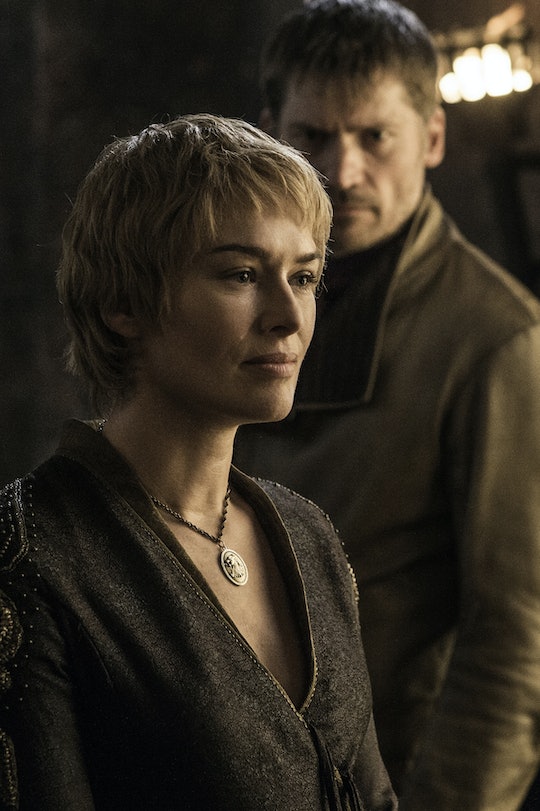 This 'Game Of Thrones' Theory May Seal Cersei's Fate

After six seasons of wondering when winter would come, it looks like it’s finally going to break through the warmth that has been King’s Landing thus far. It also means that southerners like the Lannisters will be very much out of their element when the great war arrives. And you know the Night King is coming. It’s been alluded to more than once that White Walkers will break down The Wall, but what will happen to everyone once it happens? Could Cersei become a White Walker on Game of Thrones? I'm starting to think it could be very possible.

This theory for the new season was born from the Season 7 promo titled Long Walk. It shows not only Daenerys walking to her rightful throne at Dragonstone, but Jon Snow walking through the crypts to his at Winterfell, and Cersei sitting atop the Iron Throne as we last saw her do in the Season 6 finale. After Cersei sits down, she exhales a cold visible breath. Then, the camera pans back to show the eye of a White Walker. Could this actually be a clue to Cersei's eventual fate? Will she herself join their ranks and end up becoming one of them? I mean, can you imagine Cersei as a White Walker? She would be nothing short of terrifying.

Of course, there is another possible way for fans to interpret the meaning behind the promo. Her cold breath could simply be signifying what we've known would happen for quite some time: winter has finally arrived. But there can be only one person sitting on the Iron Throne, which means there's bound to be some casualties along the way. And the theory that Cersei is turned into a White Walker kind of supports another big theory that Jaime will be the one forced to kill her in the first place.

The theory goes back to Maggy the Frog, who told a young Cersei that she would marry Robert Baratheon (check), that her three golden-haired children would all eventually die (check, check, check), and that Cersei would rule until someone younger and more beautiful than her came along (thanks to Daenerys’ arrival, that’s another possible check on the prophetic docket).

But the other prophecy was that Cersei would be murdered by her younger brother and while fans have come to expect Tyrion to eventually do that dirty work, it would be much more dramatic and tragic for Jaime to be the one to do her in. (Sure, they were twins, but it's possible she was born first, thereby technically making him younger.)

At the end of Season 6 of Game of Thrones, he didn’t look exactly thrilled to see her sitting on the throne that had belonged to their youngest son just hours before he killed himself after her explosive slaughter. Plus, let’s not forget that Jaime was forced to kill a king once before.

If Cersei becomes too out of control and goes mad just as Aerys did, Jaime might be forced to kill her as well. And if that happens, will Cersei become a White Walker? We’ve seen what happens to the dead in the North and if winter has spread all over Westeros, then it’s a very real possibility.