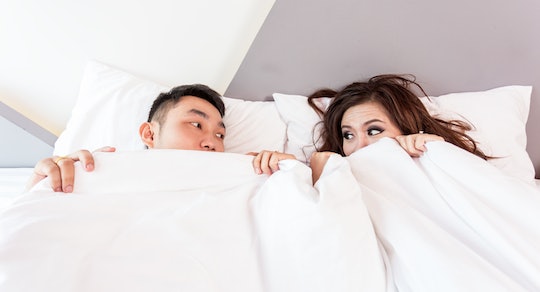 This Is How Conception Sex Affects Your Relationship

When it comes to making a baby, it seems like there would be very little guesswork involved for how to go about it (hint: there’s sex involved). But once you actually begin the process of trying to conceive, you realize that there are cycles to track, vitamins to take, and best days to get hot and heavy. That last part sounds like the most fun, right? But after a few days in a row of getting between the sheets, you might notice that arranged sex can feel a little forced, or even boring. But does conception sex hurt your relationship?

"Sex with the intention of conception can be an exciting experience at first," says Dr. Jeannie Kim, an OB-GYN at ColumbiaDoctors and Assistant Professor of Obstetrics & Gynecology at Columbia University, in an email interview with Romper. "Some people might feel liberated from that condom or other contraceptive use, or just the thought of potentially creating life with a single act is a cool concept."

But not so fast, Kim adds, "However, any activity that has to be scheduled or when conscious efforts have to be made to complete a task, that fun activity can become a chore, like let’s say, emptying the dishwasher."

Kim says it’s important couples keep in mind that it can take a woman up to one year to become pregnant, which is considered normal. This is especially vital to know in order to keep from jumping to conclusions of infertility if pregnancy doesn’t happen the first or second month of having unprotected sex, she suggests.

In addition to jumping the gun on infertility, common conception mistakes couples make include mistiming ovulation, sticking with the same position, and having sex too much, causing “burnout,” according to Parents.

When sex is on ovulation’s schedule, Kim says it’s also important to keep it as stress free as possible in order to make TTC feel like less of a chore.

“Though it may not be always spontaneous, one way to make it less stressful would be to make the experience as natural as possible, to perhaps not force the encounter, as that could also create conflict between partners,” she says. “Just remember that the couple is on the same team to achieve the same goal.”

Team baby for the win.