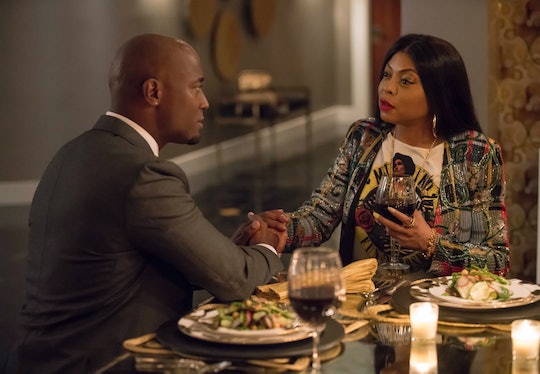 Wedding Bells Could Be In Cookie's Future On 'Empire'

For reasons I will never understand, other than to further the drama on Empire, Cookie always seems to find her way back to Lucious. No matter what terrible thing he’s done that week or how many lives he’s destroyed, there’s always that soft spot in her heart. So does Cookie marry Angelo on Empire, or will her love for Lucious ruin her chance at a normal romantic life and happiness?

Since this is Empire, I’m going to go with the latter and assume that because of a big dramatic show of his love for Cookie, whatever wedding or even engagement with Angelo that Cookie has will be short-lived. In the promo for Episode 14, it’s pretty obvious that Angelo is proposing to her and in a previous promo for the second half of Season 3, at one point you could hear his mother saying, “I will not rest until I see the Lyons groveling in the dirt.”

Could this be because Cookie’s love and history with Lucious overpowers whatever she has with Angelo, thus breaking his heart? If that’s the case, you have to assume that a simple breakup wouldn’t lead Angelo’s mom to such extremes. An extremely fancy wedding with all of the political bigwigs and a runaway bride who chooses her Lyon over the good guy, on the other hand? That would do it.

Then again, Cookie has already cheated on Angelo with Lucious (after that Beyoncé-inspired baseball bat walk around Empire Studios) and if she admits to that and turns down his proposal, that could be enough to make his mom set her claws on the entire Lyon empire, if you will. According to TV Guide, part of the synopsis for Episode 14 is that “Cookie gives Lucious unexpected news that makes him feel uneasy about the future.” That sounds like a big yes for Angelo’s proposal, but will Cookie marry Angelo on Empire?

If we’re really examining the promo, you can see Cookie witnessing a kiss between Lucious and Giuliana at the Empire club. In the next scene, Angelo is proposing to her and she’s wearing the same outfit. So it’s entirely possible that Cookie does accept, but on the basis of jealousy and hurt over Lucious kissing someone else. Even though he’s also literally married to someone else, too, so there’s that.

The whole season has had flashbacks of Cookie and Lucious’ past peppered in, giving viewers just enough details to make them somewhat hopeful for a reconciliation between the two dysfunctional moguls. Personally, I’ll never forget the flashback of Lucious putting a very young Jamal into a garbage can for dressing up in Cookie’s clothes, but I guess the beginnings of Cookie and Lucious are a lot more lovable.

But there’s got to be more reason for this history lesson all season other than the tribute album Jamal is recording. They’re painting a love story of sorts, and if the end result is Cookie marrying someone else, that doesn't really work. A big dramatic and tragic wedding for the Season 3 finale has Empire written all over it. So the wedding might happen, but there’s a pretty slim chance that Cookie will actually go through with it.