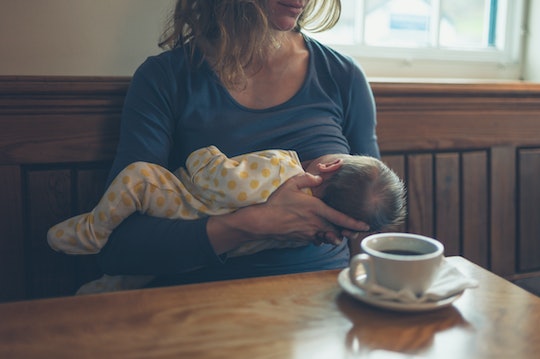 Does Drinking Caffeine While Breastfeeding Keep Your Baby Up All Night?

It will come as a surprise to no one that moms with newborn babies are generally exhausted. Keeping a tiny human alive is a 24/7 job, and between the rocking and the diaper changing and the feeding, the overwhelming desire to down shots of caffeine is often hard to overcome. But then there’s that nagging fear: Does drinking caffeine while breastfeeding keep your baby up all night?

Excellent question. We’re glad you asked. Here’s the deal: Yes and no. Like most things, when it comes to breastfeeding, the old adage “everything in moderation” applies. Depending on how much you drink, caffeine may or may not affect your baby’s sleep.

Irene Cullagh, an RN who has worked with mothers and babies for over 20 years and is an International Board Certified Lactation Consultant (IBCLC), tells Romper that the appropriate caffeine intake for a breastfeeding mom depends on the age of her baby.

“For a preemie, you may want to be more conservative,” says Cullagh. “Caffeine goes into the breastmilk but then it quickly goes away. So if you drink it in the morning, by night it will be gone.” Chugging pots of coffee, on the other hand, would be discouraged for a newborn or premature infant. But bigger, older babies? Feel free to start the percolator. Cullagh says you could even enjoy up to three cups of caffeine without affecting your child’s sleep.

The other thing to remember when determining how much caffeine impacts a nursing child is that most evidence is anecdotal. “Babies can’t tell us why they’re feeling irritable,” reminds Cullagh. “Moms chronically at Starbucks getting triple shot espressos, sure, that's not good. But just drinking regular coffee, one to three cups a day is compatible with breastfeeding.” And if you hydrate in between, even better.

When determining what’s too much, ask yourself: Is my baby just generally upset? Gassy? Teething?

“Remember, babies can have bad days, too,” says Cullagh. Not to mention the fact that as babies get older, their FOMO (fear of missing out as the cool kids say) increases. They don’t want to sleep because there’s so much exciting stuff to take in.

Not buying it? Think globally.

“Plenty of people have coffee with dinner every night in other countries. Like in Italy, it’s common to have coffee after dinner. Their babies aren’t up all night,” Cullagh tells Romper.

If you’re still worried, there’s an easy way to test your baby’s caffeine sensitivity: cut back. If you have three cups a day, try two the next. Then one the day after that. If your baby is sleeping better, perhaps that is a result of your intake. If they're not, perhaps it's something else causing the midnight wake-ups.

Either way, don't beat yourself up. Nursing is hard. It’s exhausting. If a wee bit of caffeine helps you get through it, by all means, you can have a little coffee or a some soda. The key is to not make caffeine a crutch. Cullagh recommends squeezing in some extra sleep or exercising to boost your energy levels, instead.

And if you’re concerned about nursing and sleep and caffeine in general, get an expert’s opinion. Cullagh urges all nursing moms to seek out an International Board Certified Lactation Consultant. She tells Romper that most hospitals have IBCLCs on staff. “And if you can find a pediatrician that’s an IBCLC, that’s the jackpot,” she says.

Also, find a support group you can talk to that has the training to make lactation an easier process. And, if you want to do some extra reading while nursing, Cullagh suggests picking up the book Hale’s Medication and Mother’s Milk, an evidence-based guide to all drugs (which, don’t forget caffeine is) and how they transmit into human milk. It's updated every two years, so it has the latest information on every kind of medication, from coffee to chemotherapy.

But her most important advice for all nursing moms, remember: “Dr. Google is not always the most accurate.”