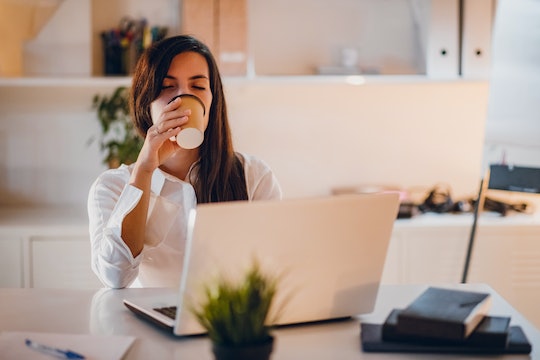 To Avoid The Jitters, This is The Best Time Of Day To Drink Coffee

Maybe you’re extra tired after a restless night or you’re just enjoying the taste of your morning joe so much that you keep refilling your mug. Before you know it, you’ve gone from being awake and alert to feeling shaky; your heart's racing, your thoughts are scattered, and you may even feel nauseous. You’re officially jittery, and it’s the worst. So what's the best time of day to drink coffee if you don't want the jitters?

It really depends on your caffeine tolerance and your food intake, but generally, “it’s actually best to not drink coffee too early,” nutritionist Ilyse Schapiro tells Romper. “Levels of cortisol in the body are higher around 8 a.m. to 9 a.m. and if you drink coffee at this time, it interferes with these levels causing the jitters and anxiety,” Schapiro says.

If you wake up well before 9 a.m. and crave something hot right away, nutritionist Anita Mirchandani tells Romper that she recommends, “starting the day with warm water with or without a splash of lemon.” She, like Schapiro, also recommends avoiding coffee until 9 a.m. if you’re prone to the jitters, which means maybe you don’t have your first cup until you get to work.

This jittery, anxious feeling you might experience after opting for that second (or third) cup of coffee is caused by caffeine. "Caffeine can cause your arteries to widen, allowing more blood flow through them. Everything is moving a little faster, [which] can cause you to feel jittery," Schapiro says. She adds that caffeine also revs up adrenaline in the body. Adrenaline is responsible for that “flight-or-fight” feeling which causes people to bypass, “rational thinking in favor of a faster response,” per Forbes. This immediate response is great if you need to run from a predator, but perhaps not so helpful if you notice yourself snapping at your spouse, your kids, or your co-workers after one too many cups of coffee.

If you’ve ever gone on a coffee date with a friend and found that you’re flying after one latte and your friend seems perfectly fine, you could simply have different caffeine tolerances. “Some people are much more sensitive to caffeine than others. [This] can be due to [your] exposure to caffeine or just how your body metabolizes it," nutritionist Brooke Alpert tells Romper. A sensitivity to caffeine could also be genetic; “we all have different receptors which determine how caffeine affects us,” Schapiro tells Romper. “If you drink coffee daily and often you develop a higher tolerance.”

If you find that you're really sensitive to coffee or getting more jittery than normal, Alpert suggests switching to half decaf and half regular. Your ritual will stay the same and so will the taste, you'll just be consuming less caffeine. You could also try adding CBD to your morning cup. "CBD is naturally calming so adding it to your coffee gives you that level-headed energy instead of those unpleasant jitters," Alpert tells Romper. And if a coffee craving strikes in the later afternoon, you're probably experiencing a blood sugar crash; you can try drinking water and having a healthy snack instead, Schapiro says.

In the throes of the coffee jitters, you’re probably looking for a way to feel better fast. Caffeine is both water and fat-soluble (per Mic) and its effects start to take hold in as little as ten minutes (the effects peak around 45 minutes). When you’re feeling jittery, drinking water isn’t going to hurt, but unfortunately it may not help too much either, since your brain and cells are already affected by the caffeine. Eating can definitely help, especially if your stomach is empty, and the enzyme known as CYP1A2 (cruciferous vegetables produce this enzyme) can “shorten caffeine’s half-life in your body,” per Vice. But it takes awhile to kick in (as long as eight hours), so you can’t just down a bunch of kale or brussels sprouts and expect to feel instantly better, though adding these vegetables to your diet over time may help.

The best thing to do is to avoid getting the jitters to begin with, and the best way to do that is to have some food with your coffee, and try to hold off on the java until 9 a.m.

More Like This
Baby-Led Weaning: A Comprehensive Guide To Introducing Solids
These Oktoberfest Instagram Captions Will Get Likes & Prosts
Eden Grinshpan On Getting Your Kids To Love Fish Eyeballs (Yes, Really!)
The Best Apple Orchards Near Upstate New York